Front and side views

One of twelve chairs 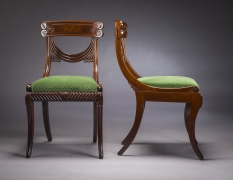 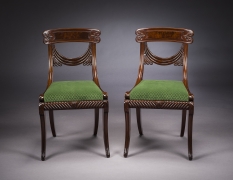 Among the most beautiful chairs produced in the United States during the Neo-Classical period was the range of mahogany klismos chairs made in Boston in the years 1815–20. And within that genre the single most beautiful design is that exemplified by a pair of boldly profiled chairs in the collection formed by Linda and George Kaufman (see J. Michael Flanigan, American Furniture from the Kaufman Collection. exhib. cat. [Washington, D.C.: National Gallery of Art, 1986], pp. 140–41 no. 51 illus.), much of which has been pledged to the National Gallery of Art, Washington, D.C.

Based upon a standard klismos design that was the vernacular production of Boston cabinetmaking shops in the late Federal period, chairs of the pattern of those in the Kaufman collection are characterized by a very broad sweep to the side profile of the back, including the dramatically raked rear saber legs. The beautifully curved crest rails are ornamented with panels displaying figured mahogany veneers set between pairs of carved, three-or-five-lobed anthemia. In typical Boston fashion, the backsplat consists of a pendant semi-circle of carved drapery flanked by three scrolls that appear to be part of the ubiquitous anthemia that is one of the signature elements of Boston furniture of this period. The front seat rails are rope carved with nine twists on each side of an acanthus leaf in the center, the whole set within a framework of carved leaves that ornament the tops of the saber legs at the front. The boldly sculptured stiles terminate in carved volutes that rest on the side rails of the chair, and, finally, the area below the stiles and above the rear legs is ornamented with a series of three reeds–what Michael Flanigan, in the Kaufman catalogue, calls “carved darts” –that “emphasize the sweet and rise of the back, and show the careful attention to detail that marks these chairs as among the finest examples of the form.”

A pair of chairs from the Winthrop family at Winterthur (see Page Talbott, “Seating Furniture in Boston, 1810-35,” The Magazine Antiques CXXIX [May 1991], p. 960 Plate vi) is identical to the pair of Kaufman chairs, and, based on the numbers of IX and X incised on the front seat rails and the slip seats, Talbott has postulated that these were once a part of a set of at least twelve. Since the Kaufman chairs are number 1 and 7, they, too, could have originally been part of the same set, as could a single in a New York private collection. A unique pair of armchairs of the same design, which are said to have descended in the Hancock family of Boston, is in the collection of The White House, Washington, D.C. (photograph in Hirschl & Adler archives).

The present set of chairs descended in the Fales family of Boston, and were almost certainly made for Samuel Fales (1775–1848) for use in his residence at 171 (later 174) Colonnade Row, a London-inspired composition of attached houses built in 1810–12 from the design of Charles Bulfinch (1763–1844) on a stretch of Common Street between Mason Street on the south and West street on the north. Fales descendant DeCoursey Fales later described the setting as “a block which was then, and for many years afterwards, the most aristocratic place of residence in Boston” (The Fales Family of Bristol, Rhode Island–Ancestry of Haliburton Fales of New York [privately printed, 1919], p. 90). Indeed, Samuel Arthur Bent, writing in the eleventh volume of the Bostonian Society’s Publications, said it was “probably the most famous residential block that Boston ever had.” He continues: “The houses were four-story brick dwellings of uniform design, with a colonnade consisting of nearly eighty slender light gray sandstone columns, usually four before each house” (as quoted by Fales, pp. 91–92).

Samuel Fales had earned his right to live in such a residence, with a successful mercantile career in which he assembled a considerable fleet of ships that brought desirable goods from exotic places around the globe. Additionally, he assembled a significant portfolio of Boston real estate. Fales also served variously as an alderman of the city Boston, a proprietor of King’s Chapel, a director of the Manufacturers and Mechanics Bank, and President of the Union Bank. Summing up his life, DeCoursey Fales quotes Ms. Georgiana Haliburton, a niece of Mrs. Fales: “Mr. Fales was a very patriotic man, proud of his country, and very proud and careful of the reputation of the good city of Boston,” as well as an unidentified testimonial where Fales was described as “a man of sterling worth, good and true in all the relations of life, both public and private, honorable and upright in all his dealings, and one of Boston’s much esteemed merchants” (p. 88).

Fales married Abigail Haliburton in 1801, and their son Haliburton Fales (1815–1869) eventually took over their residence in Colonnade Row, and it was probably through him that this set of chairs descended until recently in the Fales family.

The present set of chairs bears the numbers I, II, III, IV, V, VI, VII, VIII, IX, X, XII, and XIII, suggesting, on the one hand, that one chair—XIII—was simply incorrectly numbered or, on the other, the less likely scenario that these chairs were once part of a yet larger set. Indeed, such markings were likely not always accurate, as, for example, another set of the same pattern that descended in the Higginson family of Boston and were subsequently owned by Hirschl & Adler Galleries and are now in a New York private collection, are numbered 0, I, II, III, IV, V, VI, VII, VIII, IX, with two unnumbered.

At any rate, the intact survival of the present set of twelve chairs is extremely unusual, especially in the excellent state in which they have come down to us.