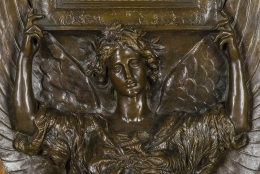 The angelic figure in Amor Caritas is Saint-Gaudens’ interpretation of a caryatid in Greek architecture. Draped female caryatids traditionally served as weight-bearing pillars, with entablatures atop their heads. Saint-Gaudens’ caryatid, realized in high relief rather than free-standing, is decorative and not structural. Her upraised arms support a tablet inscribed with inspirational words. The caryatid remained a constant theme in Saint-Gaudens’ oeuvre from 1879 until his death. He first took up the idea in 1879–80 with his commission for the tomb of Edwin D. Morgan, a former governor of New York, for Cedar Hill Cemetery, Hartford, Connecticut (destroyed by fire before its completion in marble). Saint-Gaudens revisited the caryatid theme, executed in red marble, for the mantelpiece in the entrance hall to Cornelius Vanderbilt II’s Manhattan mansion (1881–83; The Metropolitan Museum of Art), and, again, in two more marble cemetery memorial commissions, in 1887, and 1902. In 1897, at the urging of John La Farge, a fellow artist and friend, Saint-Gaudens decided to revise his caryatid design for casting in bronze. The bronze Amor Caritas of 1898 stands as the most beautifully realized and arresting of this series of female figures, the finest example of this form. The model for Amor Caritas as well as a number of other works, including Diana for the top of the tower at Madison Square Garden, New York (The Philadelphia Museum of Art), was Davida Johnson Clark, not only Saint-Gaudens’ favorite model, but also the artist’s mistress and the mother of his illegitimate son, Louis Clark.

Saint-Gaudens exhibited a large bronze of Amor Caritas (102 1/2 x 48 in.) in 1900 at the Exposition Universelle, Paris, along with several other works. His contributions won him the Grand Prize. The French Government purchased Amor Caritas for the Musée du Luxembourg, Paris, an extraordinary honor for an American at that time. It remains today in the French national collection and is currently the property of the Musée d’Orsay. In recognition of his talents and his stature in contemporary sculpture, Saint-Gaudens was made a corresponding member of the Société des Beaux-Arts, and named an officer of the Legion of Honor.

Following the success of the large Amor Caritas, Saint-Gaudens arranged for the casting of a 40-inch reduction. Of the 23 known versions of this cast, seventeen are in public collections. 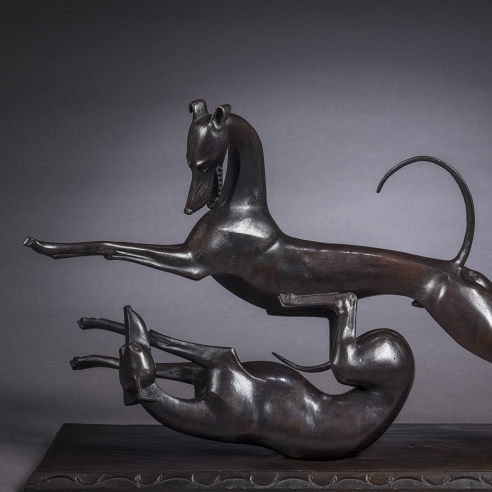