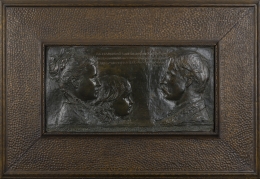 Poet and editor Richard Watson Gilder (1844–1909) was the grandson of John Gilder, who laid the cornerstone of Girard College, Philadelphia, and the son of the Rev. William Henry Gilder (1812–1864), publisher of the Literary Register, a quarterly review, and Chaplain of the Fortieth Regiment of New York Volunteers during the Civil War. Richard Gilder was born in Bordentown, New Jersey, and educated in a seminary established by his father in Flushing, Long Island. In 1863, he volunteered with a Philadelphia regiment and saw action during the Gettysburg campaign. In 1868, three years after joining the staff of the Newark, New Jersey, Advertiser, he and Newton Crane established the Newark Morning Register. He then became editor of Hours at Home, and when that journal was incorporated into Scribner's Monthly—The Century Illustrated Monthly Magazine, Gilder became its associate editor, and ultimately, in 1881, its editor-in-chief. Between 1875 and 1897 Gilder published four volumes of poetry and five books of song.  He founded the Author's Club in 1882, and was active in the Washington Centennial Celebrations of 1889 and the World's Columbian Exposition of 1893. In addition to his activities as a tremendously influential journalist and poet, Gilder took a leadership role in a range of reformist and professional organizations including the Society of American Architects, the International Copyright League, the American Academy of Arts and Letters, the Simplified Spelling Board, the Citizens’ Union, the Kindergarten Association, and the New York Society for the Blind. He was the Chairman of the New York Tenement House Commission whose report was responsible for the Tenement House Law of 1901 requiring designs that allowed more light and air into tenement apartments. Gilder’s eminence is reflected in a string of honorary degrees from Dickinson College, Carlisle, Pennsylvania, 1883 (LL.D.); Harvard College, 1890 (A.M.); Princeton University, 1896 (L.H.D.); Yale University, 1901 (Litt.D.); and Wesleyan University, Middletown, Connecticut, 1903 (LL.D.).

Helena de Kay, daughter of naval officer Commodore George C. de Kay, and granddaughter of the Knickerbocker poet Joseph Rodman Drake (1795–1820), was a talented artist who trained at the Cooper Union and the National Academy of Design, New York with her friend, Maria Oakey (later married to Thomas Dewing) and also studied privately at the Tenth Street Studio Building with John La Farge and Winslow Homer. Homer gave de Kay a picture (1872, Museo Nacional Thyssen-Bornemisza, Madrid) for a wedding gift when she married Richard Gilder in 1874. There is dispute over whether de Kay was, in fact, Homer’s hypothetical “lost love.” The Gilders lived on East 15th Street just off Union Square at the northern end of what was then New York’s theater, publishing, and art district. Helena de Kay continued to supply illustrations for her husband’s magazine at the same time that she raised a family of five surviving children. At the Gilder house on 15th Street, a former stable remodeled by Stanford White, Helena Gilder presided over an animated circle of cultural luminaries in a regular Friday night salon who included, at various times, Saint-Gaudens, John La Farge, Walt Whitman, Emma Lazarus, Cecilia Beaux, William Dean Howells, Joseph Jefferson (a famous actor), Mr. and Mrs. Grover Cleveland,  and Mariana Griswold Van Rensselaer. Helena Gilder was among the founders, along with Saint-Gaudens, of the Society of American Artists. She was also a founder of the Art Students’ League. Rodman Gilder (1877–1953), who was a toddler when he (arguably) “sat” for Saint-Gaudens, subsequently enjoyed an adult career as a journalist and author. He married Comfort Tiffany, the daughter of Louis Comfort Tiffany, and served in the American forces in World War I.

In early 1879, prior to assuming the editorship of Scribner's Monthly—The Century Illustrated Monthly Magazine, the Gilders and their two-year old son, Rodman (1877–1953), toured Europe and visited Paris, partly to see their friend, Augustus Saint-Gaudens. While there, the Gilder family posed for this, the first of Saint-Gaudens's group portraits in low relief, which he made during breaks from modeling the statue of Admiral David Farragut (1879–80; Madison Square Park, New York). At the same time, Richard Gilder modeled for Farragut's legs, a fact which made him very proud. In September of that year Saint-Gaudens executed a separate, more-fully realized bronze profile relief of young Rodman Gilder).

Augustus Saint-Gaudens was a master of the bas (low) relief portrait, producing, in the course of his career over eighty such works in both rectangular and circular, or tondo, form. Saint-Gaudens’ skill in creating bas reliefs was acquired early. He entered the world of art apprenticed to a New York cameo cutter. As an aspiring young sculptor in Paris and Rome, Saint-Gaudens occasionally returned to that commercial skill to generate income. Saint-Gaudens' bas reliefs began with sketches, as was his common practice. They were modeled in clay and then cast in plaster before being realized primarily in bronze, and, very occasionally, in marble. In the course of this process, they could be enlarged or reduced, with tondo or rectangular versions. In his low portrait reliefs, Saint-Gaudens synthesized the attributes of Renaissance portrait medals and contemporary French drawings with the technical virtuosity required to make them look well in any light. This, combined with their arresting sense of individuality and intimacy, mark Saint-Gaudens's singular powers as a portraitist.