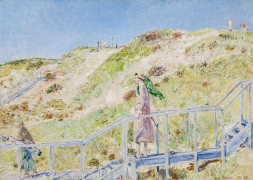 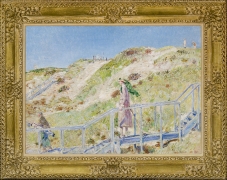 In 1898 Hassam made his first trip to East Hampton, New York, a small village hugging the Atlantic coast near the far tip of Long Island, about 100 miles east of New York City. In the period after the Civil War, the east end of Long Island began to attract a smattering of artists looking for unspoiled sketching locations accessible from the City. That trickle became a stream after 1878 when the members of the Tile Club, a group of convivial New York artists loosely organized into a social group, took up an invitation by Scribner’s Magazine to visit a house in East Hampton identified as the birthplace of John Howard Payne (1791–1852). Payne, an actor and playwright, in 1823 wrote the words for the song “Home Sweet Home.” The song endured to become a bromide of American popular nostalgia, sung by soldiers of both sides during the Civil War, and a favorite of President and Mrs. Lincoln. After the Tile Club visited and Scribner’s published an amusing account in February 1879, other artists followed. Thomas Moran, an editor of Scribner’s as well as member of the club, built a home and studio in the village in 1884. Among his houseguests were his friends, Walter Shirlaw, and Shirlaw’s student from the Art Students League, Gaines Ruger Donoho.

Hassam and Donoho met in 1887, when the two overlapped at the Académie Julien in Paris. In 1898, Childe and Maud Hassam took up an invitation from Ruger and Matilda Donoho to visit them in East Hampton. As it happened, East Hampton proved the perfect match for Hassam’s interests, personal and professional. East Hampton was an old settlement, established in the 1640s by English-born Massachusetts Puritans, who initially named the town Maidstone, after their home in Kent. By the end of the 17th century the name had been changed to East Hampton to better blend with nearby Southampton and West Hampton. For Hassam, who prized his New England roots, he had found a surrogate home 103 miles from New York City.

Hassam painted his first East Hampton pictures during his visit with Donoho, in the summer of 1898: Old Hook Mill, Easthampton; Old House and Garden, East Hampton, Long Island; Windmill at Sundown, East Hampton and July Night (a portrait of Hassam’s wife, Maud, at a Fourth of July celebration at the Donoho house). East Hampton maintained its charm even as Southampton became a glamorous social center. In 1919, after years of visiting (and flush with the proceeds from his flag pictures), Hassam purchased land on Egypt Lane from Matilda Donoho, the widow of his late artist friend. The Hassams moved into a 1722 house, “Willow Bend” that the Donohos had maintained as a rental property. They made a home there. From 1920 to his death, he and Maude lived at Willow Bend from May through October.

One of the enduring charms of East Hampton was the Maidstone Club, founded in 1891 and resurrecting the town’s original name. Its dues were initially set low enough to allow membership for “impecunious artists.” Thomas Moran joined in 1894, the year he built his East Hampton house. While Maidstone first offered a beach and lawn tennis facility, golf soon followed. Beginning in 1894 with a modest three holes, the golf course quickly expanded to eighteen holes by 1899. In 1922, the club acquired an additional 80 acres of adjacent dune land on which it constructed 12 new golf holes, designed by the pioneer Scottish golfer and golf course designer, Willie Park, Jr. Maidstone is one of a relatively small number of true “link” golf courses in the United States. The term originated in Scotland and referred to a golf course built on coastal sand dunes, with holes marked by wispy grass (as contrasted with manicured greens) and characterized by strong ocean breezes that factor into the nature of the golf game. During the years of Hassam’s presence in East Hampton, the Maidstone golf course was the subject of considerable expenditure, attention, and pride. The Club was an easy mile walk from Willow Grove and Hassam swam regularly at its beach and golfed on the challenging links.

A “hazard” in a golf course refers to a hole which presents a deliberately included obstacle, often water, but in this case the naturally occurring dunes on the Long Island coast. In Down the Steps from the Dune Hazard, East Hampton, Hassam has painted one of the holes on the ocean dunes, so steep that a staircase has been built for players to descend from the upper level of the hole to the lower level. The subject gives Hassam the opportunity to paint a genre picture of a glorious day spent on the Maidstone course, a pleasure he knew well. Under an incandescent blue sky, groups of golfers play the course. In the foreground a woman, golf club trailing behind her, descends the stairs, preceded by a caddy holding her bag of clubs. The blue of the sky is reflected in the white painted wooden stairs. More than a simple genre picture, however, Down the Steps from the Dune Hazard, East Hampton is a late Hassam landscape masterwork, recalling the artist’s loving attention to Celia Thaxter’s garden at Appledore. Hassam was no scientific botanist, but an astute observer of landscape vegetation. With virtuoso brushwork, Hassam summons the complex ecology of the sand dunes that line the Long Island Atlantic coast shore. The American beach grass that is their primary cover, unbothered by wind and salt spray, extends its roots into the dunes, protecting them from wind and water erosion. The dunes, in turn, protect interior land from ocean ravages, allowing a whole different range of vegetation. Hassam’s picture not only portrays a glorious day on the links, but also recreates the majesty of the dunes themselves with their patches of grass, variety of plants, and exposed areas of sand.