Detail of the village of Cold Spring

Detail of the West Point Foundry 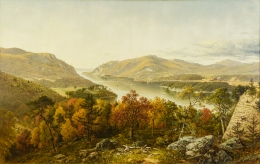 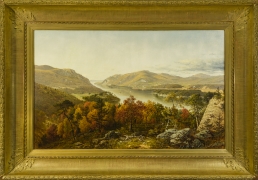 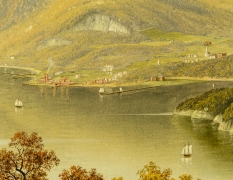 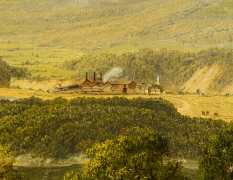 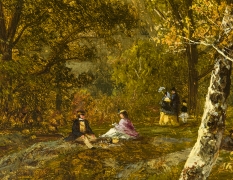 In 1867, Johnson visited a spot above West Point on the Hudson River to paint a view that had long been a favorite of the landscape artists comprising the so-called “Hudson River School.” John Kensett had painted from the same vantage point ten years earlier, describing the area in a letter of 1854 as being “in the midst of the beautiful highlands of the Hudson, which I think for their peculiar kind of beauty there is nothing to surpass.” The Kensett painting, now called Hudson River Scene but previously known as View of Storm King from Fort Putnam, has been part of the collection of the Metropolitan Museum of Art since 1907, predating the founding of an “American Wing” by seventeen years.

Both Kensett and Johnson were attracted to the spectacular scenery just south of the point where the river makes a dramatic “S” turn from north to south. (The Hudson River is tidal until Troy, New York. The rising tide flows north, the ebbing tide south. Currents in the “S” curve can be treacherous.)  For Kensett, in 1857, the area was already hallowed in colonial history. Fort Clinton was built on the river shore to block the British advance. Fort Putnam, built in 1778, stood on higher ground to buttress Fort Clinton. Below Fort Putnam is the United States Military Academy, West Point, founded in 1801. By the time that Johnson painted in 1867, the area had acquired another layer of history. West Point supplied the leadership for both Confederate and Union armies in the Civil War. The West Point Foundry, established in 1817, was a major manufacturer of artillery and arms and munitions for the Union Army. Despite the very martial history of the spot, Kensett and Johnson both came for the scenery. Johnson’s view is the more topographically accurate of the two. In his picture, Johnson set his easel on the West Bank of the river, adjacent to a stone parapet belonging to the ruins of Fort Putnam. To the left, but largely out of the picture is Crow’s Nest Mountain. Beyond that, Storm King Mountain faces across the river to Breakneck Ridge on the east side, the two forming a wind gap at the northern edge of the “S” curve. Johnson’s view of the distant eastern shore includes Mount Taurus, just south of Breakneck Ridge.