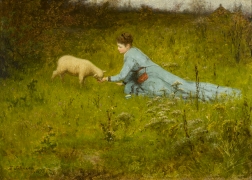 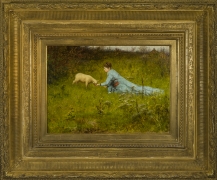 The Pet Lamb is a Nantucket subject by Johnson from 1873. In it a lovely young maiden lies in the middle of a lush meadow feeding a young lamb from her hand. The form of the woman’s blue-gray dress with bright red purse stands out as a brilliant slash of color amidst the Barbizon-inspired, tonal background. Stylistically and thematically the painting fits squarely in Johnson’s work from the early 1870s, when he brightened his palette, increasingly pursued out-of-door subjects, and concentrated on paintings of women, either singly or in groups. The painting is touching in its intimacy and warmth, again characteristic of works from this period.

Johnson almost certainly based The Pet Lamb upon the poem of the same title by the English poet, William Wordsworth (1770–1850), from 1800. The poem begins:

The dew was falling fast, the stars began to blink;
I heard a voice: it said, “Drink, pretty Creature, drink!”
And, looking o’er the hedge, before me I espied
A snow-white mountain Lamb with a Maiden at its side.

No other sheep were near; the lamb was all alone,
And by a slender cord was tethered to a stone;
With one knee on the grass did the little Maiden kneel,
While to that Mountain Lamb she gave its evening meal.

The Lamb, while from her hand he thus his supper took,
Seemed to feast with head and ears; and his tail with pleasure shook.
“Drink, pretty creature, drink,” she said in such a tone
That I almost received her heart into my own.
(The Miscellaneous Poems of William Wordsworth, I [London: Longman, Hurst, Rees, Orme, Brown, 1820], p. 28.)

The Pet Lamb was owned by George Mortimer Pullman (1831–1897) of Chicago. Pullman was an engineer and the inventor of the railroad sleeping car. Pullman acquired The Pet Lamb by 1876, when he lent it to the Chicago Interstate Industrial Exposition of that year. Eastman Johnson later painted several portraits of Pullman and his family, which date variously from about 1880 to 1900.

Johnson painted a second version of The Pet Lamb (1873, 22 x 26 in., Munson-Williams-Proctor Institute, Utica, New York). The two pictures are substantially alike but differ in several ways, including the placement of the cup and various details of the landscape. The Utica version notably omits the roof of the cottage seen in the upper right of the present painting. Johnson probably painted this smaller version of The Pet Lamb as basis of an engraving made by the English émigré engraver, Robert Hinshelwood (1812–1879). Hinshelwood’s engraving of The Pet Lamb, executed in 1874, is nearly the same size as the present painting, and was a well known and popular image published by R. E. Moore of New York.

The Pet Lamb will be included in Patricia Hills’s forthcoming catalogue raisonné of Eastman Johnson’s work.

Genre
Back To Top