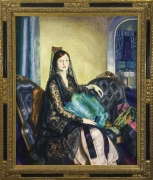 Bellows’s varied interests led him to explore different genres as his mood suited him, but portraiture was one constant throughout his career. (The most thorough treatment of Bellows’s portraits is Jane Myers, “‘The Most Searching Place in the World’: Bellows and Portraiture,” in Michael Quick et. al., The Paintings of George Bellows, exhib. cat. [Fort Worth, Texas: Amon Carter Museum of Art, 1992], pp. 171–238.) And while his experimentation with contemporary art theories would seem to mark him as a modernist, Bellows understood his work as the extension of three American masters of the preceding generation: Winslow Homer, Thomas Eakins, and James MacNeill Whistler. This becomes evident when looking at Bellows’s portraits, which combine the frank, psychologically penetrating characteristics of Eakins’s portraits with color harmonies adapted from Whistler’s. Bellows also often used poses reminiscent of the works of the American master portraitists, William Merritt Chase, John Singer Sargent, and Bellows’s mentor, Henri. Bellows used portraiture as a vehicle for artistic exploration. He found the demands of portrait commissions to be frustrating, and once he was firmly established as a successful artist, he limited his portraits to friends or family, making these mature works among the most intimate of his entire oeuvre.

Elizabeth Alexander and her husband, Norbert Heermann, an artist and critic, were Bellows’s neighbors in Woodstock, New York, where Bellows spent his summers. Bellows painted this portrait in September 1924 in preparation for solo exhibition at the Durand-Ruel Galleries in New York the following year. Bellows sensed that the Durand-Ruel exhibition would be important for his career, writing that the gallery “held such a high standard of quality in the pictures they have shown, and since practically no American has ever been included in their gallery, this exhibition may have added a significance which I am very glad to accept” (Bellows, letter to Frank Crowninshield, December 15, 1924, Bellows Papers, Amherst College Library, as quoted in ibid., p. 238). Bellows spent the summer painting a number of ambitious, monumental figure paintings, including the present portrait. In them, he seems to have departed from his earlier portrait style, following what was surely another characteristically abrupt change in his style’s trajectory. As Jane Myers has noted, in these works, Bellows “departed further from a naturalistic viewpoint, using bright colors in expressive and independent fashion and giving a predominant role to unusual patterned textures that earlier had been confined to accents” (ibid., p. 227). Surely the present picture supports Myers’s assertion. In this highly decorative, brilliantly colored portrait in the gold-papered drawing room of Bellows’s house in Woodstock, Elizabeth Alexander is seated on a Victorian horsehair-upholstered sofa (diminutive in reality, but scaled up by the artist for grand pictorial effect) holding a garish, blue-green feather, and dressed in a showy black lace dress and mantilla. Perhaps Bellows here is satirizing the several Spanish portrait painters then in vogue in America, such as Ignacio Zuloaga, for whom Bellows had few nice words. According to his wife, Emma Bellows:

George did not like portrait commissions and when after a large dinner in New York given in honor of some former artist who had been quite patronizing of American art—the foreign artist (as he was putting on his overcoat) turned to George and said—“You Americans do not go in for portrait painting do you Bellows” George said “No. We import most of our labor” (Emma Bellows, speaking to Homer Saint-Gaudens, Carnegie Institute, Pittsburgh, Pennsylvania, curatorial files, as quoted in ibid., p. 229).

Bellows’s premonition that the Durand-Ruel show would have a great significance in his career did come true, although in a most tragic and unexpected way. In January 1925, one month before the show was to open, Bellows died suddenly from acute appendicitis. His last paintings seem to indicate that he was looking to art history for new sources of inspiration. Perhaps his most beguiling of his late works, Two Women (1924, Portland Museum of Art, Maine; see ibid., p. 228 fig 55 illus. in color) is a visual quote of Titian’s Sacred and Profane Love; perhaps the present work makes a similar conceit to the colorful portraits of Spanish women by Francisco Goya. Bellows left no explanations about these late works, so we are left to speculate as to what it was he was trying to convey. Regardless, in works such as Portrait of Elizabeth Alexander, we see Bellows’s full powers in the handling of color and paint, and in creating portraits of intense power and expression.

This painting will be included in the forthcoming catalogue raisonné of Bellows’s work currently in preparation by Glenn C. Peck, in cooperation with the artist’s daughter and grandchildren.