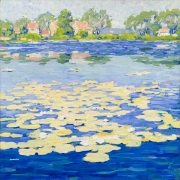 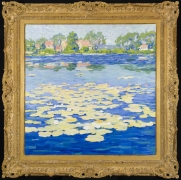 JANE PETERSON (1876–1965)
Niles Pond (Yellow and Turquoise), about 1916–20
Oil on canvas, 32 x 32 in.
Signed and inscribed (at lower left): JANE PETERSON
RECORDED: J. Jonathan Joseph, Jane Peterson: American Artist (Boston, Massachusetts: privately published, 1981), pp. 76, 77 illus. in color // Cynthia Roznoy et al., Jane Peterson: At Home and Abroad, exhib. cat. (Waterbury, Connecticut: Mattatuck Museum of Art, 2017), pp. viii fig. 1 illus. in color, ix, xi
EX COLL.: the artist; to [Sea Dunes Gallery, Ipswich, Massachusetts]; to J. Jonathan Joseph, Boston and Los Angeles, 1969 until the present
Niles Pond sits just below the neck of land that opens out into Eastern Point in Gloucester, Massachusetts, the southern extension of the peninsula that juts into the Atlantic Ocean, forming the western shore of Gloucester Harbor. The pond is named for the nineteenth-century farmer, Thomas Niles, whose land comprised 450 acres of Eastern Point. This lake is a remarkable geographic feature, a 36-acre body of fresh water separated on its western shore at one point from Brace Cove and the Atlantic Ocean by a 400-foot wide causeway. Farmer Niles buttressed the causeway during his tenure from 1844 to 1887 and it has been periodically reinforced since. The pond itself is held as a Great Pond, owned by the Commonwealth of Massachusetts within an Audubon Society designated “Important Bird Area” and open to the public for recreational use including fishing and ice skating.
It it little wonder that Peterson found the pond a suitable subject in her search for beauty. In Niles Pond (Yellow and Turquoise) she captures the glorious delight of a Gloucester summer’s day. The calm pond waters, home to water lilies rendered in thickly painted swirls of color, reflect the houses on the shore and the blue sky above. Using post-impressionist strategies, Peterson here is an American artist free to experiment, painting in the aftermath of the groundbreaking New York Armory Show of 1913 and in the spirit of her older colleague, Maurice Prendergast. Peterson’s early relationship with the area endured after her marriage, when she spent summers at the Phillip estate in Ipswich.
Well-known and honored during her lifetime, Peterson’s reputation languished after her death. Her painting does not fit in neatly with the narrative of twentieth-century art, increasingly dominated by abstraction and theoretical concerns. In fact, however, the qualities that endeared her work to contemporaries remain as relevant as ever.  Neither an original nor a derivative artist, she remained unwavering in her purpose to translate the beauty she experienced in the world onto the painter’s canvas. Open-minded with regard to a wide range of contemporary stylistic devices insofar as they could help to realize that goal, Jane Peterson always bent toward the expression of beauty.