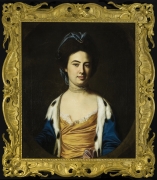 EXHIBITED: Kennedy Galleries, New York, 1977, Age of the Revolution and Early Republic in Fine and Decorative Arts: 1750–1824 (not in catalogue)

EX COLL.: Mr. John and Mrs. Anne Boutineau Robinson, Boston, 1769; to her parents, James and Susannah Faneuil Boutineau, Boston, 1770; to her sister and brother-in-law, Michael and Susannah Boutineau Francklin, Halifax, Nova Scotia, 1775; to their eldest son, James Boutineau Francklin, until 1841; to his daughter, Elizabeth Gould Francklin Uniacke, and son-in-law, the Rev. Robert Fitzgerald Uniacke, in 1841; by descent, at Uniacke House, Mount Uniacke, Nova Scotia, until 1927; to Mrs. Sadie Uniacke Rutherford, Buckinghamshire, England, 1927, and by descent, until 1972; to sale, Sotheby’s London, March 22, 1972, no. 84, as “Portrait of Mrs. Robinson, nee Boutineau;” to [Kennedy Galleries, Inc., New York, 1972 until at least 1977]; to Mr. and Mrs. Stanley Tananbaum, New York, and by descent, until the present

The identity of the sitter in Portrait of Anne Boutineau Robinson has been muddied since at least 1977, the result of an old label, handwritten in pencil (and now somewhat smudged) affixed to the back of the picture which mistakenly named the sitter as “Miss Robinson, Sister of Lady Francklin.” Copley painted portraits of Mr. and Mrs. Michael Francklin (spelled thus) in 1762. Undated, these are believed to have been wedding portraits. The portraits were listed by Prown as “attributed,” but have since been located and are now in the collection of the Nova Scotia Museum at the Uniacke Estate Museum Park in Mount Uniacke, Nova Scotia, about 25 miles north of Halifax. Francklin was a Halifax merchant with close ties to Boston merchants. He became involved in Nova Scotia politics and served as Lieutenant Governor of the province from 1766 to 1776. In 1762, he married Susannah Boutineau (1740–1816) of Boston, the daughter of James Boutineau (1710–1778) and Susannah Faneuil (1712–1792), a younger sister of Peter Faneuil (1700–1743), the wealthy merchant and philanthropist who, in 1742, commissioned and gave Faneuil Hall to the people of Boston.

Anne Boutineau Robinson, Susannah’s younger sister and also a niece of Peter Faneuil, was born on January 18, 1748. She married John Robinson (d. 1787), on October 5, 1769, the likely occasion for the present portrait. At the time of the marriage, John Robinson was already a target of patriot opprobrium. He had earlier encountered opposition when posted as His Majesty’s Customs Commissioner for Newport, Rhode Island, hounded for the zealousness of his attempts to enforce parliamentary regulations. He found himself equally unwelcome in Boston. In 1769, Robinson was involved in an altercation with James Otis, Jr. at the British Coffee House in Boston. Otis was a prominent Boston political figure and patriot. In the course of a dispute, Robinson struck Otis a blow to the head, which apparently aggravated Otis’s already acknowledged unstable mental condition. Robinson was defended in court by his newly acquired father-in-law, James Boutineau. Robinson acknowledged the assault and apologized to Otis, who accepted both the apology and reimbursement for medical and legal costs. Otis, cared for by family, was only intermittently lucid thereafter. Boston was no longer tenable for Robinson. On March 16, 1770, he returned to England with his bride where they remained, later joined by her Loyalist parents.

This portrait, with its dark background and sharp contrast of light and shadow, is very much of a style that came to the fore in Boston in 1769. Indeed, this bust portrait shares some costume elements with a Copley portrait of 1769, Mrs. Jeremiah Lee. The portraits of Mr. and Mrs. Lee were commissioned for their Marblehead, Massachusetts, mansion and are full size, measuring 95 by 59 inches. Mrs. Lee’s is portrayed wearing an “uncorseted pumpkin-colored caftan held together by a purple sash knotted into a rosette. . . . A pelisse trimmed with ermine tips falls from her shoulders. In her hair and around her neck are multiple strands of pearls" (Staiti, p. 259). While Anne Robinson occupies a more modest-size canvas, and the arrangement of her hair decoration is different, the similarities with Mrs. Lee indicate Copley’s use of the same studio costume props. Although Mrs. Robinson sits directly in front of the viewer, she looks left, the right side of her face revealed in full light and the left side obscured by the shadow of the dark background, a device similar to the one used in the Lee portrait. The lady’s pale skin and richly colored clothes stand out against a dark background as she sits securely within the confines of a trompe l’oeil spandrel, a framing device frequently used by the artist. The original elaborately carved rococo-style portrait frame was, similarly, one of Copley’s favorites.