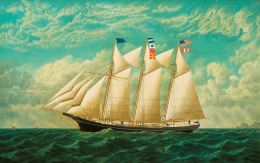 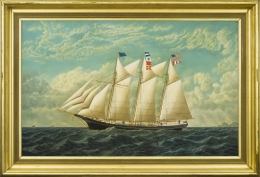 Lee painted this masterful portrait of the schooner Excelsior sailing off Point Bonita, located at the entrance to San Francisco Bay in the Marin Headlands, about 1876. The Excelsior was built that year by Hans D. Bendixsen in his shipyard in Fairhaven, California, on the northern peninsula of Humboldt Bay, across the narrows from Eureka. Bendixsen was an important figure in west coast maritime history, building over fifty three- and four-masted schooners in the last quarter of the nineteenth century. Bendixsen built the Excelsior, a splendid three-masted schooner of 348 tons measuring 138 feet long by 32 feet wide by 11 feet deep, for the Austro-Hungarian Kustel brothers, who had emigrated to California via Panama in 1852. The Excelsior was first commanded by Captain Oscar Conrad Kustel (1834–1921) and based in the port of San Francisco. She was subsequently sold to John Smith of San Francisco, in 1884, and later to Charles Nelson, in 1886. In 1878, the swift Excelsior made a ballast passage from Shanghai to Port Townsend, Washington, in twenty-seven days. She operated in the Pacific for thirty years, carrying lumber, salmon, and other valuable cargo, and was wrecked in Nelson’s Lagoon, Alaska, on August 30, 1906. This portrait of the Excelsior has descended in the family of Oscar Conrad Kustel until the present time. 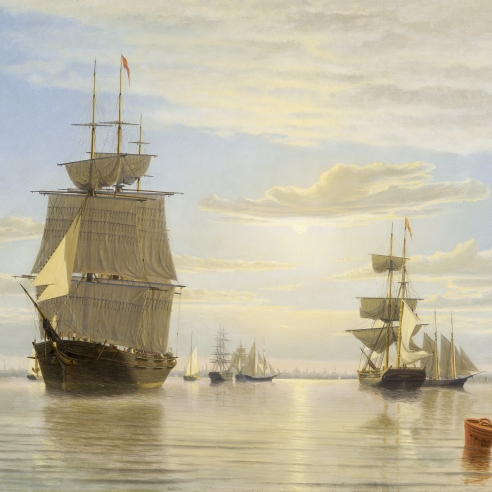