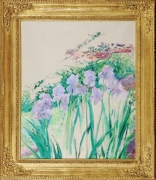 EX COLL.: the artist; to her daughter, Margaret Perry, by descent; to her nieces, Lilla Cabot Levitt, Anita English, and Elizabeth Lyon; to [Hirschl & Adler Galleries, Inc., New York, 1986]; to private collection, 1986 until the present

This painting is accompanied by a photo certificate which reads: “We hereby certify that the painting of which this is a photograph is a genuine work by our grandmother, Lilla Cabot Perry, which we inherited by descent through her daughter and our aunt, Miss Margaret Perry. [Dated] November 2, 1987 [Signed] Lilla Cabot Levitt / Anita English / Elizabeth Lyon