La Dame Blanche, a lady whose identity (and nationality, for that matter) remains unknown, is a tantalizing example of the portrait style that made the work of the artist so highly coveted. In this salon-size oil, Boutet employed some of the same stylistic devices that gave his Joan of Arc watercolor series such visual delight. The handling of the drapery behind the sitter echoes the richly patterned finery of the luminaries of the French medieval court in the artist's St. Joan saga. The juxtaposition of pattern on pattern, here seen in the two throw pillows and the rear curtain, is no medieval conceit, but a reflection of the enduring influence of the aesthetics of the Japanese print on late-nineteenth-century western art.

Boutet's striking choice of variations on white for both costume and setting bestows tremendous distinction on his sitter. She is tastefully dressed in white organdy, the flounced collar and sleeves trimmed with simple ribbon, and the skirt made of dotted swiss. Her extravagantly pleated and ruffled bonnet echoes the bodice of her dress, but is trimmed in two tones of darker colored ribbon that draw attention to her face. The white lady's gesture of hand to chin and cheek is standard visual vocabulary for thoughtfulness (and most commonly reserved for male subjects known for their intellectual prowess). In the execution of the face and hands Boutet de Monvel reminds his audience of his early training as an academic figure painter. La Dame Blanche is, at the same time, flesh and blood, but with a complexion that has the subtle coloring and flawless texture of perfect porcelain. She looks directly at the viewer, not with impudence or immodesty, but with a penetrating full-face gaze that conveys intelligence and compassion. Her costume is rich and simple, stylish, but modest and tasteful. Boutet de Monvel created for this lady a setting to reinforce her persona. The all-white interior was a refined, avant-garde style of the time, a peaceful oasis away from the cacophany of late-nineteenth-century clutter and exoticism. One is reminded, for example, of Charles Rennie Mackintosh's white interiors of the same period. Boutet's furnishings, however, are not Art-Nouveau, but traditional and neo-classical. The architectonic motifs of the cream-colored chair, and specifically the fluted Doric side balustrade, echo in the fluted Doric pilaster on the left-hand rear wall. This is a lady who appears as reassuring as a storybook heroine, calm, lovely, and enduring, with a perfect poise that promises a happy ending. 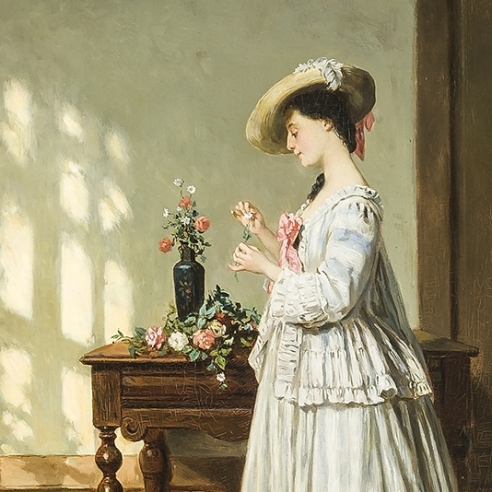 Salon
Back To Top