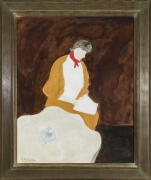 MILTON AVERY (1885–1965)
Red Kerchief, 1960
Oil on canvas, 40 x 32 in.
Signed, dated, and inscribed (at lower left): Milton Avery; (on the back): “Red Kerchief” / by / Milton Avery / 42 x 32 / 1960
EX COLL: Mr. and Mrs. Gustave Levy, New York, 1962, and by descent, until 2019
Red Kerchief features a solitary grey-haired woman reading next to a table, its top tilted upward towards the viewer. The subject is silhouetted against a plain background, the chair on which she sits hidden by her bulky clothing. Sally Avery could certainly be the model in the picture, but her identity remains a mystery. Avery’s penchant for stripped-down designs and two-dimensional forms was such that he typically avoided descriptive detail in rendering his sitter’s faces.
The theme of genteel women enjoying moments of comtemplation or recreational activities such as reading was popularized during the late-nineteenth century by American impressionists such as Edmund C. Tarbell and William Merritt Chase, but, as evident in Red Kerchief, Avery’s distinctive vision, with its emphasis on pared-down forms and structural clarity, propelled it to a new level. Consistent with his penchant for blending representation and abstraction, the work functions as both an elegant image of a woman in an interior and as a harmonious arrangement of interlocking shapes of color––the deft touch of bright red in the upper register, along with the broader zones of white, yellow-gold, beige, and mottled browns making us very much aware of the lively interplay between negative and positive space. A striking example of Avery’s late work, Red Kerchief brings to mind his artistic philosophy as he described it in 1951, stating: “I try to construct a picture in which shapes, spaces, colors, form a set of unique relationships, independent of any subject matter. At the same time I try to capture and translate the excitement and emotion aroused in me by the impact with the original idea.”
Red Kerchief was painted in 1960, the year in which Avery had a critically acclaimed retrospective (his most extensive show to date) at the Whitney Museum of American Art in New York. (Unfortunately, Avery’s fragile health prevented him from attending the opening of his show.) When the exhibition closed in mid-March, it was circulated to museums throughout the United States under the auspices of the Amercan Federation of Arts. Avery subsequently spent the summer and autumn in painting in Provincetown, where, that October, he suffered a second heart attack that prompted his return to New York. In the months ahead, he recuperated from his illness but required round-the-clock nursing. Thereafter, Avery painted less frequently, producing oils on paper until February 1964. In the wake of his death on January 3, 1965, he was laid to rest at the Artists Cemetery in Woodstock, New York.