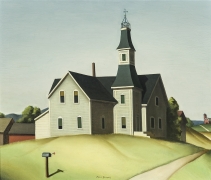 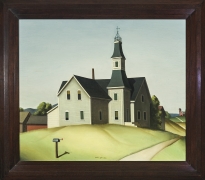 It was Sample's practice to drive the rustic roads of Orleans County in Vermon't Northern Kingdom sketching subject matter. Often he had a companion, his wife or his brother-in-law, Edwin Clark, an author and professional book reviewer. The village of Evansville, Vermont, is less than six miles from Westmore in Brownington Township, northwest of Lake Willoughby. The subject of the painting, once a church (and apparently a schoolhouse, as Sample inscribed “Schoolhouse” on the stretcher) but now a bric-a-brac shop, stands on the northern side of State Route 58.

The Evansville area provided abundant subject matter for Sample: the village store, a group of barns, the church—all painted in 1933 and 1934. In 1935 and 1936 he painted Evansville in the Fall and Storm near Evansville. Although Sample did a small Evansville scene in 1941, he did not return to the subject again until 1946. Probably the Samples were unable to travel to Lake Willoughby by car because of the rationing of gasoline during World War II.

Church in Evansville was probably started in Vermont and completed when Sample returned to Pasadena in the fall of 1934 to teach at the University of Southern California. It is one of a group of paintings that were exhibited at Ferargil Gallery in New York in March 1935. Other paintings in the exhibition included Band Concert, Storm Brewing, Tardy, and Freight Cars in the Desert. Ferargil Gallery also represented Grant Wood and Thomas Hart Benton, and the exhibition of Sample's works followed a Grant Wood exhibition and preceded Thomas Hart Benton exhibition. The March 1935 exhibition was Sample's second solo show with Ferargil.