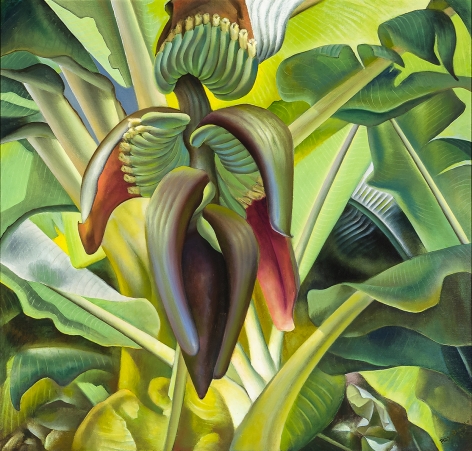 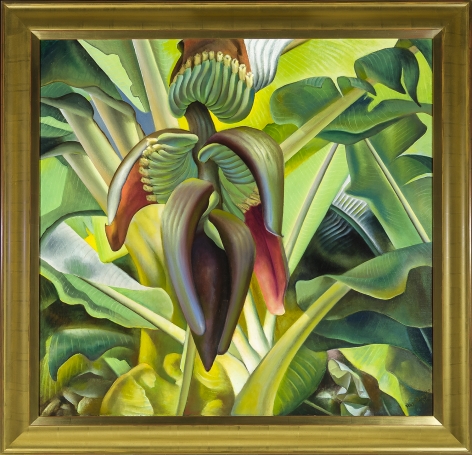 Braught’s intuitive approach to form and color––as well as his penchant for trees––can be seen in Banana Tree. The work is dated 1937, which indicates that Braught painted it while he was living in Ithaca, New York, having accepted a teaching position at Cornell University upon his return from the West Indies. Like other portrayals of banana plants and coconuts that he painted around this time (several of which, including Banana Tree, were featured in his solo exhibition at the Ferargil Galleries in 1938), Braught presents a stunning, close-up view of his subject––a complex network of stems and leafage that act as a foil to the intricate flower spike (also known as “inflorescence”) which dominates the composition, its reddish-purple scales setting it off from the surrounding green and yellow foliage (see Ross Braught, exhib. cat. [New York: Ferargil Galleries, 1938]). The image is replete with dappled sunlight and shadow, but it is the multiplicity of organic shapes––gently curving stems, sturdy branches, and angular leaf blades magnified and reduced to their very essence––that immediately catch the viewer’s eye, creating what a critic in 1938 referred to as Braught’s characteristic “large, free patterns” (Howard Devree, “A Reviewer’s Notebook,” New York Times, February 20, 1938). Certainly, Braught’s canvas––representative of what the art historian David Cleveland has described as a “nervous system, a botanical ganglia”––bring to mind the enlarged floral paintings of Georgia O’Keeffe, which also explore formal and decorative concerns in relation to nature; however, Braught’s bright, clear colors, along with his artful composition and assured draftsmanship, result in an interpretation that is decidedly more forceful and vibrant (David Cleveland, “Ross Braught: Nature’s Fearful Symmetry,” in Ross Braught, 1898–1983: A Visual Diary, exhib. cat. [New York: Hirschl & Adler Galleries, 2000], p. 27).