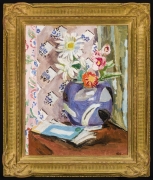 Whatever her subject, Bell infused her work with a vivid sense of color and bold design, as apparent in Still Life of Flowers. As was typical of her floral pieces, she adheres to a tightly cropped design that imbues the image with a sense of immediacy. The viewer’s gaze is immediately drawn to the bouquet of mixed summer blossoms set in a globular vase adored with schematic leaf forms, an object made by Bell’s son, Quentin (1910–1996) in 1936, while living in Stoke-on-Trent, where he learned to make pottery at the Burslem School of Art.

Bell’s arrangement rests on the corner of a dresser, its plain finish acting as a foil to the diverse shapes of the flowers, as well as the patterned textile panels that serve as the backdrop. By including the day’s post in the lower left, Bell alludes to the everyday nature of the scene and demonstrates her love of portraying the domestic sphere. Yet the painting is anything but mundane: Bell’s Matissean palette works with her fluent brushwork to create a cheerful and very intimate image in which she celebrates the simple beauties of the home while paying tribute to her offspring’s artistic endeavors.