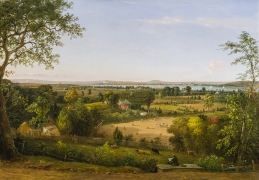 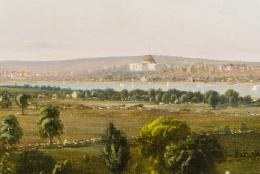 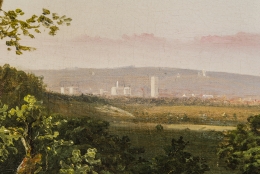 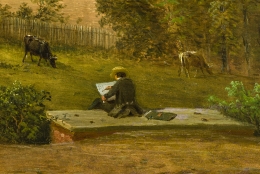 WILLIAM MACLEOD (1811–1892)
View of the City of Washington From the Anacostia Shore, 1856
Oil on canvas, 37 x 53 in.
Signed and dated (at lower right): Wm Macleod. 1856
RECORDED: Andrew J. Cosentino and Henry H. Glassie, The Capital Image: Painters in Washington, 1800–1915 (Washington, D.C.: Smithsonian Institution Press, 1983), p. 105
EXHIBITED: (possibly) Taylor & Maury, Washington, D.C., 1856 // Baltimore Museum of Art, Maryland, 1988, Maryland Collects: American Paintings from 1750 to 1900 // Hirschl & Adler Galleries, New York, April 27–June 7, 1991, Neo-Classicism in America: Inspiration and Innovation, 1810–1840, p. 120 no. 91 illus.
EX COLL: Brune Family Estate, Baltimore, Maryland, until 1984; to private collection, Baltimore, Maryland, 1894–90; [Hirschl &Adler Galleries, New York, 1990]; to private collection, 1993, until the present
The bucolic visit in View of the City of Washington From the Anacostia Shore shows the city of Washington as glimpsed from a vantage point to the south near Alexandria, Virginia, on a late summer’s day. The observer’s gaze is immediately drawn to the lower right of the image, where an artist, possibly MacLeod himself, can be seen sketching. Further on, past a meadow with grazing cattle and some figures conversing by a picket fence, MacLeod provide us with a glimpse of the lush countryside, including a field dotted with haystacks, and beyond that, a picturesque farmhouse.
On the far horizon, beyond the Anacostia and Potomac Rivers, we can discern the public buildings of the nation’s capital as they looked during the mid-nineteenth century, among them the half-completed Washington Monument at far left, the Department of the Treasury, the red sandstone Smithsonian Institution “Castle,” the dome of the Capitol, and the Navy Yard. (The dome of the Capitol, as seen in MacLeod’s painting, was originally designed by Charles Bullfinch. It was replaced by Thomas U. Walter’s cast-iron dome in 1863. Construction began on the Washington Monument in 1854. However, it was halted during that same year, when it was about 150 feet high, due to funding problems. Work on the monument resumed in 1879 and was completed in 1884. However, because the original quarry stone was no longer available and did not match the type used during the second phase of construction, the obelisk is lighter at the bottom and darker at the top.) The aura of serenity that permeates the image is enhanced by the broad expanse of lucent sky and by the tall, wispy trees that frame either side of the picture, a compositional device that MacLeod may have encountered through contact with the poetic landscapes of Thomas Doughty (1793–1856), a forerunner of the Hudson River School who is known to have visited Georgetown in 1842.
MacLeod’s interest in depicting Washington, D.C. was first manifested in 1844, when he painted A Glimpse of the Capitol (21 3/4 x 29 1/2 in.; The Diplomatic Reception Rooms, United States Department of State, Washington, D.C.), which features the Capitol and its surroundings as it looked after the building’s completion by Charles Bullfinch during that same year. Twelve years later, he created the present work, as well as a variant titled View of the City of Washington from the Virginia Shore (oil on canvas, 38 1/4 x 54 1/4 in.), which is in the collection of The White House. The White House picture is almost identical to the Hirschl & Adler painting except for the placement of the cows, the handling of the trees on the sides, and the inclusion of an umbrella next to the artist in the foreground. It would have been one of these versions that Macleod exhibited at Taylor & Maury, a book and stationery store on Pennsylvania Avenue, in the spring of 1856. According to a reviewer for a Washington newspaper, the painting was:
[O]f unusual interest to our art-loving citizens. It portrays the famous view that meets the eye when, standing on ‘Shuter’s Hill,’ west of Alexandria, we look down upon the level fields spreading northeast towards the Potomac, beyond which the city of Washington skirts the horizon in one unbroken line, its dim dwellings marked at intervals by its various public buildings, that are plainly distinguishable. We know the scene well; have often stood on that very culvert on the Leesburg road where the artist sat while sketching it, and, through a break in the woods skirting the turnpike, have gazed upon its wide expanding splendor at the hour and in the season the picture represents ––‘Mulliken Hill’ in the distance––the Capitol, Monument, Smithsonian, and the Navy Yard ... standing out in bold relief, giving great interest to the view.... [W]e are glad that one, at least, of the long-neglected imposing scenes in our vicinity, showing the metropolis as a prominent feature, has at last been successfully painted by one of our own artists (“Local Intelligence: Fine Painting,” Evening Star [Washington, D.C.], May 26, 1856).