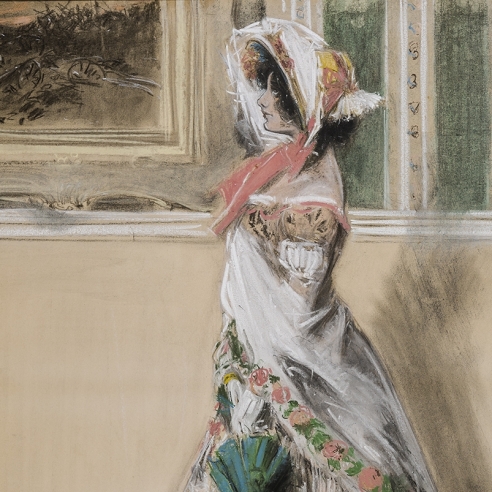 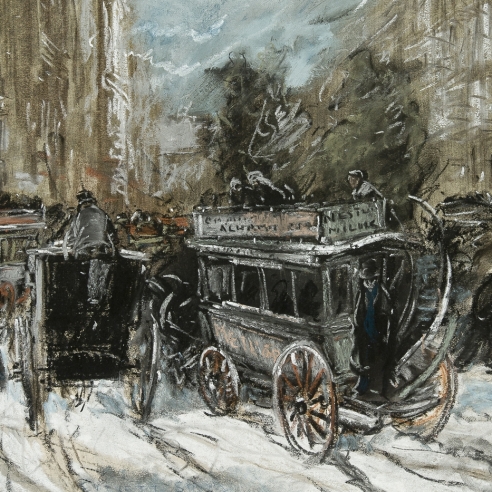 Everett Shinn is remembered today as one of “The Eight,” a group of eight insurgent artists who showed their work at the Macbeth Gallery in New York in 1908, in a dramatic and well-publicized break with the artistic establishment entrenched at New York’s prestigious National Academy of Design. In fact, “The Eight,” comprised of Robert Henri, John Sloan, George Luks, William Glackens, Ernest Lawson, Maurice Prendergast, and Arthur B. Davies, as well as Shinn, were a tremendously divergent group who came together on one occasion. Both before and after, they individually pursued their separate careers in a complex maze of interconnecting friendships and occasional artistic alliances. Like Henri, Sloan, Luks, and Glackens, Shinn came to New York from Philadelphia, and, with Sloan, Luks, and Glackens, but emphatically not Henri, launched his artistic career in newspaper journalism.

Born in Woodstown, New Jersey, Shinn studied engineering and industrial design at the Spring Garden Institute in Philadelphia and worked there for the Thackeray Gas Fixture Works for three years, beginning in 1890. In 1893 he enrolled at the school of the Pennsylvania Academy of the Fine Arts, supporting himself at the same time as a staff artist for The Philadelphia Press. Shinn met Luks, Glackens, Sloan, and Henri at the Academy. In 1895 Luks, Glackens, and Sloan joined Shinn at the Press. Journalistic illustration was the perfect training ground for the socially engaged art that Robert Henri expounded. The artist-journalists, on the street with their sketch pads, would make quick notations from life, and then head back to the newspaper offices to work these up quickly as illustrations for news stories.

In 1897, Shinn moved to New York, recruited from The Philadelphia Press to join his friends Luks and Glackens, who had settled in the previous year at the New York World. Shinn subsequently enjoyed a substantial career as an illustrator, working for newspapers and magazines, including Vanity Fair and Harper’s, where Shinn was the first artist to publish a full-color center page illustration. In the course of his lifetime he illustrated over ninety magazine articles and twenty-eight books.

The social and artistic circle that clustered around Robert Henri was seriously devoted to the theater, both professional and home-made. It was a major part of their lives, and a constant and recurrent theme in all of their art; in this way they very much echoed the work of the French Impressionists, whose artistic philosophy and themes they adapted to an American idiom. Luks had briefly been half of a vaudeville duo (with his brother) as a young man. Sloan and Henri had wide-ranging tastes in theater, but in later years were particularly close to the left-leaning, avant-garde Greenwich Village group centered around the Provincetown Playhouse. Shinn shared their interest, but his focus was ultimately very different.

In 1899, Shinn held a private exhibition of five pastels at Elsie de Wolfe’s Irving Place home. In 1900 he traveled to Paris, where his own theatrical and artistic interests found powerful corroboration in the work of Edgar Degas. Paris’s gritty underside also fueled his growing interest in working class street scenes. When Shinn returned to New York, he embarked on a busy and successful career as an artist, with a frenetic schedule of exhibitions, both in New York, at galleries including Boussod-Valadon (1901), M. Knoedler and Co. (1903), Durand-Ruel (1904), and E. Gimpel and Wildenstein (both 1905), as well as at the Pennsylvania Academy of the Fine Arts, Philadelphia (1901) and the St. Louis Art Museum.

Despite his success as an easel painter and fine artist, Shinn applied himself to a variety of visual arts media. He worked as a magazine illustrator, and in addition he undertook a variety of interior decoration projects in tandem with Elsie de Wolf and Stanford White, turning early to a French-flavored, confectionary rococo style that suited these powerful taste-makers. In 1906, Shinn received a major commission to decorate the interior of David Belasco’s new Stuyvesant Theatre, which opened in New York in 1907, soon after the scandalous and tragic death of White. Shinn contributed eighteen decorative panels to the ornate and elegant interior.

While Shinn joined with the Henri group for the Macbeth exhibition, and also showed at the Exhibition of Independent Artists organized by Henri and Sloan in 1910, he did not participate in the 1913 Armory Show. Since 1908, Shinn had concentrated his artistic work almost entirely on theater subjects. His studio on Waverly Place featured a working stage where the convivial group presented its serious amateur theatrics. In 1912, he and Florence Scovel Shinn were divorced amidst a flurry of sensational headlines in the tabloid press. Shinn would go on to three subsequent marriages, beginning in 1913, providing steady copy for the journalists of whose ranks he had once been a member. After his divorce, in fact, there was both a personal and artistic separation between Shinn and his old Philadelphia friends.

In 1917, Shinn, ever versatile, curious, and flexible, set off in a direction little explored by serious New York artists. He became a set designer and art director for the fledgling motion picture industry. He was hired in New York by the director of a New York motion picture studio, Samuel Goldfish. Shinn followed Goldfish, soon Goldwyn, to Hollywood, California, where he was the art director for Goldwyn’s 1917 Polly of the Circus. Shinn was a debonair and attractive figure. He remained with Goldwyn Pictures until 1920, when he was enticed away to Inspiration Pictures. Here Shinn was art director for The Bright Shawl, a successful film whose cast included Richard Barthelmess, Dorothy Gish, and Mary Astor. Divorced in 1920 from Corinne Baldwin Shinn, the mother of his two children, Shinn married a third time in 1921. In 1923 he moved from Inspiration Pictures to work as art director for William Randolph Hearst. Hearst hired Shinn to design the period Revolutionary drama, Janice Meredith, which was to star Hearst’s mistress, Marion Davies. Shinn completed the project but had his fill of Hearst, and presumably Hollywood. With his pockets jingling full of Hearst money, he returned East to resume his career. Shinn found ready work decorating Long Island mansions with sumptuous rococo murals. It was, after all, the era of the Great Gatsby.

Through the 1920s and 1930s, Shinn worked on a variety of artistic projects, spending little time on easel painting. Since 1913, American fine art had been increasingly dominated by a modernist school that tilted sharply in the direction of abstract art. The late 1930s, however, saw a revival of interest in “The Eight,” who were perceived, in the spirit of the time, as socially engaged American realist artists in revolt against an entrenched establishment. In 1937, the Whitney Museum organized a nine-man show entitled New York Realists. Six of these nine were original members of “The Eight,” including Shinn. The Whitney catalogue drew a parallel between “The Eight” and the newly emerging American school of politicized social realists. In 1938, Macbeth Galleries marked the thirty-year anniversary of “The Eight” show with a commemorative exhibition. In 1939, Shinn was awarded the Watson F. Blair prize for watercolor at the 18th Annual Watercolor Exhibition of the Chicago Art Institute, an incentive to his newly re-energized career of painting and exhibiting. In 1943, Shinn affiliated himself with the Ferargil Galleries in New York, the same year in which he participated in a show at The Brooklyn Museum, titled The Eight, recalling a past by now glorious and bathed in nostalgia.