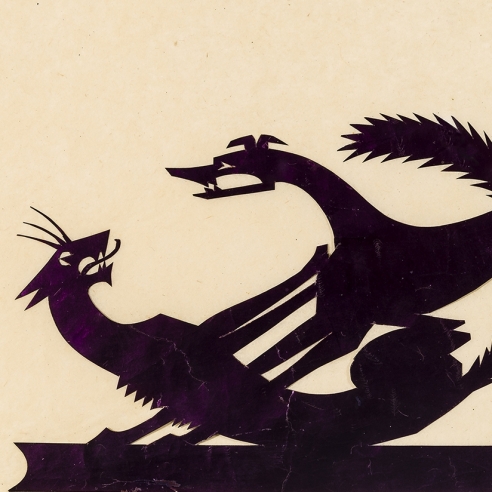 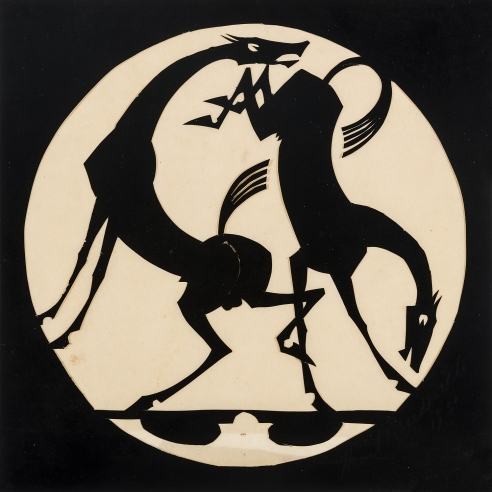 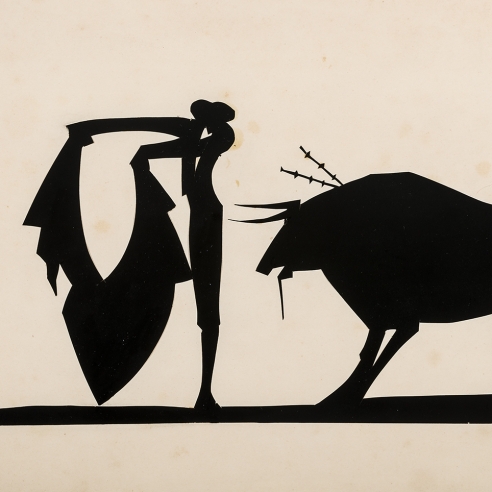 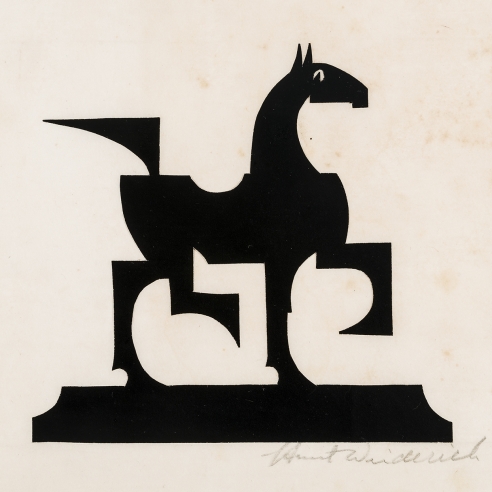 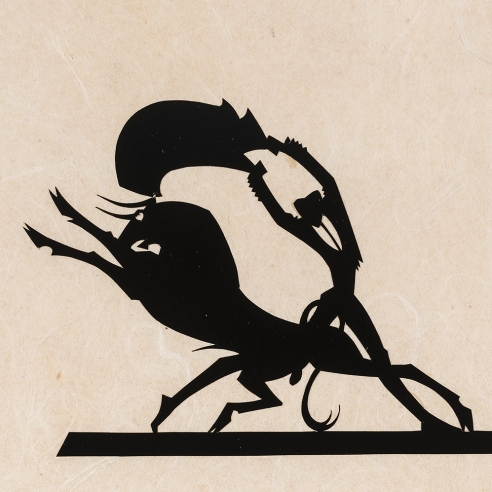 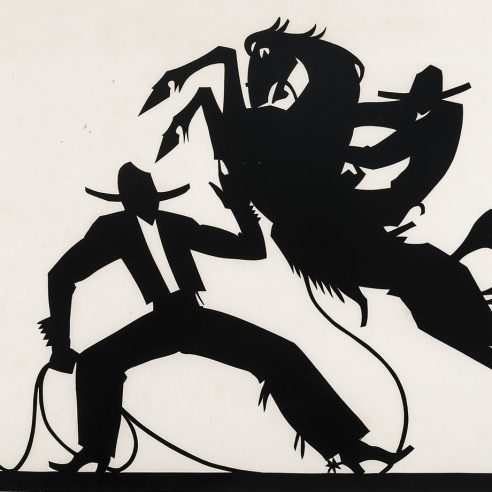 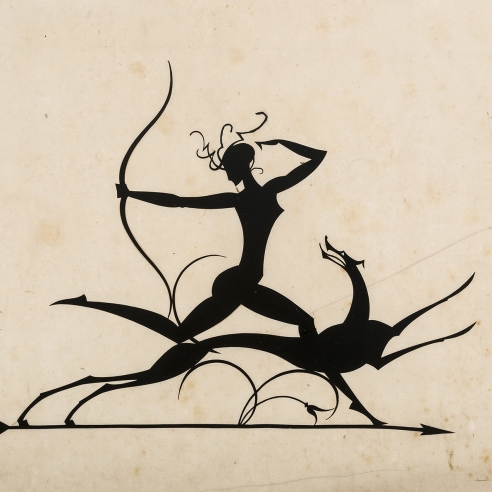 Throughout his career, Hunt Diederich’s art was informed by his early exposure to two very different environments: the privileged lifestyle of the Prussian landed gentry, and a cowboy’s pioneering existence in the American West. While these were contrasting experiences, to be sure, they shared a common denominator which Diederich wove into every aspect of his work: an appreciation of and emphasis on animals.

Diederich was the son of Col. Ernest Diederich, a Prussian cavalry officer who bred and trained military horses at his estate in Hungary, and Eleanor Hunt Diederich, daughter of Boston artist, William Morris Hunt. Theirs was a rarefied world of polo matches and stag hunts, exotic hounds and diverse animals. Col. Diederich died in a hunting accident in 1887, and his sons were schooled in Switzerland. Diederich and his younger brother arrived in America around 1900, living with maternal relatives. Dispatched to Milton Academy, the willful and artistically inclined youth found little to interest him in the traditional New England academic education offered there. He left without graduating. Instead, Diederich headed west and worked as a cowboy in Arizona and Wyoming, where a relation owned a ranch. There he was exposed to a society shaped by headstrong, rugged individuals; Indians; and horse culture.

The literature on Diederich’s years of training is sparse and inconsistent with regard to dating. The salient facts, however, are well-documented. The dates for Diederich’s western hegira remain unknown. He may have studied at the Boston Art School in 1903. He is listed as a sculpture student for 1904–05 on the register of the Académie Julian in Paris. From 1906 to 1908, Diederich studied sculpture at the school of the Pennsylvania Academy of the Fine Arts. By his own account, he was summarily dismissed in 1908 after using what the school described as “improper language” in a mixed-gender class. In 1907 and 1908, Diederich exhibited sculptures at the annual shows of the Pennsylvania Academy. The works reflected his heritage and experience, Indian and Portrait of W. M. Hunt in 1907, and, in 1908, Bronco Buster. Despite his abrupt exit, Diederich did well at the Pennsylvania Academy and found a good friend in his fellow sculpture student, Paul Manship. In July 2008, Diederich enlisted Manship, on the spur of the moment, to hop a freighter bound for Spain. Manship and Diederich traveled together around Spain, sleeping out of doors and eating whatever was cheapest. Finally, Diederich loaned Manship fifteen dollars for a steerage passage back home.1908. Of this period, John Manship, his father’s biographer, wrote:

Manship formed an especially important friendship at this time with William Hunt Diederich, grandson of the painter William Morris Hunt. A talented artist with a remarkable sense of design, Diederich had a magnetic personality and was quite unencumbered with bourgeois scruples: he said and did whatever he chose. In many ways he and Manship were opposites, although they shared talent and a love of art. Manship was scrupulous and conscientious, hard-working and ambitious, while Diederich was impulsive and amoral, self-destructive to an extent, and somewhat mad. . . .  Hunt was a natural genius with a remarkable sense of design; it is a moot point whether he influenced Manship or Manship him. Their friendship certainly enriched them both (John Manship, Paul Manship [Abbeville Press: New York, 1989], pp. 21–23).

John Manship says that though the artists remained friends, Isabel McIlwaine, Manship’s then fiancée, later his wife, “never quite forgave Hunt, whom she blamed for having led her Paul astray” (Manship, p. 24). Diederich, at any rate wound up in Paris. He may have sometime gone to Africa. He is also reported to have studied at some point with the French academic sculptor and animalier, Emmanuel Frémiet, who died in 1910.

By 1910 Diederich was settled enough in Paris enough to maintain a studio and submit works to the Paris Salon. He showed sculptures in cement and bronze at the Salons of 1910 and 1911. In 1911, he married (the first of two wives), Mary de Anders, a Russian of Scandinavian origin. He may have gone to Rome in 1912. By 1913, he was back in Paris. Indeed, it was his entry in the 1913 Salon d’Automne, where he showed a bronze called Levriers (Greyhounds) that laid the basis for an international reputation. The piece attracted positive notice from art critics in Europe and America. Reviewing the Salon show, the critic for the Burlington Magazine, noted that “one of the finest, perhaps quite the finest, of the sculptures is the Greyhounds of Mr. Hunt Diederich, a young American sculptor who lives in Paris, but was up to now unknown” (R.E.D., p. 172), while a columnist for the Boston Evening Transcript ecstatically declared the work “this year’s revelation in the American section of the Autumn Salon . . . perhaps . . . of the whole Salon” (Boston Evening Transcript, December 17, 1913). Diederich reported that this bronze was purchased from the salon by Baron Robert de Rothschild. In the artist’s own words, “the success of my Greyhounds at the Autumn Salon of 1913 gave me a certain European position, and by the outbreak of the War I was well established and had numerous important commissions” (Brinton, n.p.). While in Paris, Diederich moved in an artistic circle that included the modernist sculptors Elie Nadelman and Alexander Archipenko. With the upheaval caused by World War I, all three found themselves in New York where they continued their friendship.

The animal theme dominated Diederich’s art from his earliest works. Whether American Western or Prussian Continental, cowboy or hunting-related, the motifs he used in his bronze and wrought-iron compositions almost always incorporated images of horses, dogs, deer, roosters, or other animals, wild or domesticated. In every instance he displayed an empathetic affinity for his subject, readily drawing on his own past for inspiration. Admired by Diederich for their seemingly limitless design potential, animals increasingly dominated his compositions, and served as the ultimate organic element of his nature-based, Art Deco sensibility. He remarked in 1920, “I love animals first, last and always. . . . Animals seem to me truly plastic. They possess such supple, unspoiled rhythm.”

Diederich was a restless spirit all his life, constantly shifting residence between the United States, Mexico and Europe. He made a successful career for himself in the 1920s and 1930s as a sculptor and a creator of decorative ironwork—firescreens, candelabras, weathervanes, gates—all functional and beautiful at the same time. Creative and multi-talented, he also worked in watercolor and ceramics.