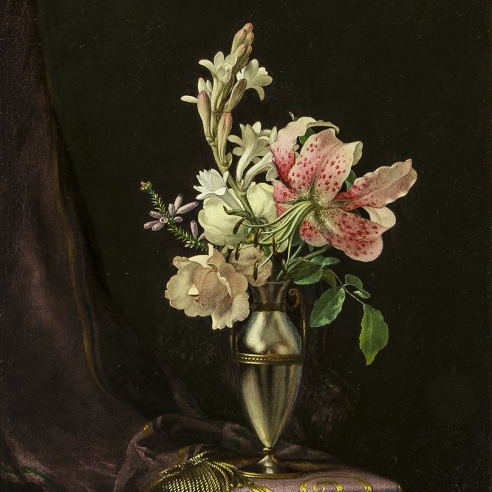 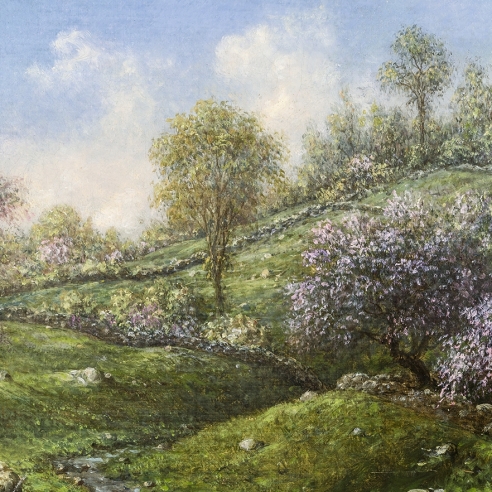 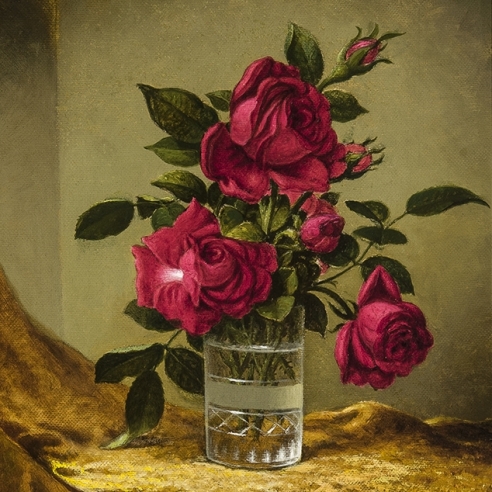 Martin Johnson Heade was born in Lumberville, Pennsylvania, a Delaware River town in Bucks County. His earliest teachers were local Quaker artists—Edward Hicks (of Peaceable Kingdom fame) and his nephew, Thomas Hicks. Heade began as a portrait painter in the naive style, and pursued a career in portraiture and genre painting, albeit in a more sophisticated style after his return from Rome and Paris in the mid-1840s. Theodore E. Stebbins, Jr., in The Life and Works of Martin Johnson Heade (1975), says that Heade “progressed from . . . [an] awkward, untrained manner . . . to a competent, academic style, comparable to the standards of the leading practitioners of the day . . . [in] a period, however, of generally uninspired portraits in America” (p. 15).

Heade turned to landscape painting in the 1850s, and it is as a landscapist and a painter of birds and flowers that he attained master status. The man seems to have been as personally restless as his painted images are still. He lived at different times in Rhode Island; New York City; Boston; Summit, New Jersey; and Washington, D. C., before marrying for the first time and moving permanently to Florida in 1883 at the age of sixty-four. From the 1850s to the 1880s he painted throughout the New England and Middle Atlantic states, notably on Long Island, in New Jersey, Maine, Rhode Island, Connecticut, and Massachusetts. These local forays were punctuated by painting trips to Brazil (1863); Nicaragua and Colombia (1866–67); Colombia, Panama, and Jamaica (1869–70); British Columbia (1872); and California (1875). Although Heade lived in the famous Tenth Street Artist’s Studio Building in 1859–60, and again from 1866 until 1879 (sharing a studio with Frederic Edwin Church), he appears to have been relatively unsociable. Stebbins notes:

He was literally the only landscapist of his time who lived in New York never to become even an Associate Member of the National Academy [of Design], and he was refused membership in the Century Association, a club to which nearly all the leading New York painters belonged (ibid., p. 103).

Although Heade earned a living from his art, he was not considered a major artist in his lifetime, and what visibility he may have enjoyed began to fade when he left New York City in 1881. From his death until the middle of the twentieth century, both his memory and his work languished in obscurity. Thus, the close critical attention of the past thirty years represents in Heade’s case not a “rediscovery,” as in, for example, the renewed interest in nineteenth-century celebrities such as Frederic Church or Albert Bierstadt, but the new discovery of an artist whose work was never very highly regarded or closely examined during his own lifetime. Stebbins was both perceptive and prophetic in his 1969 catalogue essay (Martin Johnson Heade, University of Maryland Art Gallery) when he concluded that Heade’s “personality and his art were both out of place in their time, and they made his worldly failure inevitable; perhaps only now can his art be given its due.”

Heade painted his first floral still life in 1860, and throughout the 1860s and 1870s, and indeed until the end of his life, he produced an extensive body of work in which he further explored the parameters of the genre. In many of these still lifes, the number of floral elements is reduced in order to achieve compositional clarity and to highlight the latent symbolism of each subject. While Heade was not the only artist of his generation to paint floral still lifes—Severin Roesen, George Henry Hall, and George Cochran Lambdin also did notable work in this area—he did pursue this specialty with unprecedented seriousness. Heade also was a serious student of birds (particularly hummingbirds) and flowers (especially orchids), as well as an avid hunter of game birds. From 1880 until his death in 1904, he was a frequent contributor to the magazine Field and Stream, writing highly opinionated commentaries under the pseudonym of “Didymus.” During this same period, Heade moved to Florida and turned increasingly to still-life painting, taking on with particular verve a series of flower pictures. He experimented with a number of different types of flowers, including roses, orange blossoms, magnolias, and Cherokee roses, and in a variety of compositions.