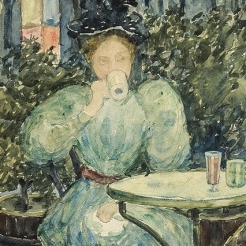 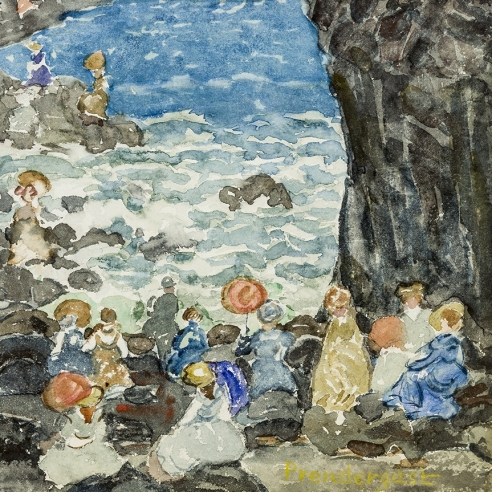 An innovative painter who synthesized the strategies of European Post-Impressionism with his intuitive response to his environment, Maurice Prendergast worked outside mainstream American art circles, creating lyrical images of contemporary life that stood out for their simplified forms, decorative patterning, and non-naturalistic use of color.

Born in St. John’s, Newfoundland, Prendergast was the eldest son of Maurice Prendergast, a local shopkeeper, and Mary Malvina Germaine, the daughter of a Boston physician. His brother, Charles James Prendergast (1863–1948), also became an artist, creating polychrome relief carvings, frames, and paintings. In 1868, the Prendergast family moved to Boston, where Maurice and Charles attended the Rice Grammar School for Boys. Both men left school after eight or nine years to begin their adult careers, Maurice working as a wrapping clerk, grocer, and laborer, Charles as an assistant at Doll and Richards, a leading Boston art gallery.

Maurice decided early on in life that he wanted to be an artist. By 1879, Prendergast was working as a painter of show cards at the Boston firm of J. P. Marshall, an activity that brought him into contact with the watercolor medium. He continued to explore the aesthetic potential of water-based pigments in his work as a designer and illustrator, taking great delight in watercolor’s inherent spontaneity, transparent, light-reflecting qualities, and easy portability: it would later serve as one of his primary means of artistic expression, bringing him his earliest critical recognition. By 1884 Prendergast had shown some of his artwork to the wife of a local minister, who advised him to go to Europe. During 1886–87, he and his brother made a brief trip to England, where Prendergast painted loosely rendered views of Wales that reflected the impact of the Barbizon School. Following his return to the United States, he continued his commercial work and painted in his spare time. Seeking to refine his skills, Prendergast lived in Paris from 1887 until 1891, during which time he studied intermittently at the Académies Julian and Colarossi. He also familiarized himself with the work of vanguard artists such as James McNeill Whistler, Paul Gauguin, and Henri de Toulouse-Lautrec, as well as with the intimate genre scenes of the Nabis painters Pierre Bonnard and Edouard Vuillard. The stylized shapes and two-dimensional compositions of Japanese prints were also key factors in the development of his pictorial syntax, as were the bright hues of the impressionists.

Upon returning to Boston, Prendergast continued his commercial work, undertaking a series of lucrative book illustrations and poster designs inspired by Art Nouveau and the precepts of the Arts and Crafts movement. He also embarked on his career as a fine artist (he was first listed in the city directory as such in 1893), melding the influences he was exposed to abroad into his own distinctive style, which he applied primarily to images of genteel female types. Working in an abbreviated shorthand technique in which he emphasized pose and gesture rather than descriptive detail, Prendergast imbued his images with a dreamlike quality while creating a vivid sense of animation. Over time, his forms became increasingly abstract, interpreted as broad patches of color, a technique that helped give his work a timeless, otherworldly quality.

In 1895, Prendergast made his professional debut in local art circles, exhibiting two watercolors at the spring exhibition of the Boston Art Club. Two years later, a selection of his monotypes was displayed at Hart & Watson’s Gallery in Boston and a group of his watercolors were featured the New York Water Color Club. His work quickly caught the attention of Sarah Choate Sears (Mrs. Montgomery Sears), a Boston-based watercolor painter and photographer who admired his unique style, which was a far cry from the conservative brand of Impressionism practiced by Boston School painters such as Edward C. Tarbell and William MacGregor Paxton. Sears and her husband subsequently financed Prendergast’s third trip abroad (1898–99), where he spent much of his time in Venice painting sparkling views of streets, bridges, and piazzas that, when exhibited at the Eastman Chase Gallery in Boston in 1899, found a ready audience among both patrons and dealers.

His reputation firmly established in Boston, Prendergast then set his sights on New York City, where his work was promoted by the influential dealer William Macbeth, who exhibited a selection of his watercolors and monotypes at the Macbeth Gallery in March 1900. Eager to attract New York buyers, Prendergast focused his attention on images of Central Park and Prospect Park in Brooklyn, executed in the same spirit as his Boston subjects. An exhibition (with Hermann Dudley Moore) of his watercolors and monotypes at the Art Institute of Chicago in 1900 established Prendergast’s national reputation, as did a retrospective exhibition of his work at the Cincinnati Art Association in 1902. In New York, Prendergast’s individualistic approach to rendering the world around him led to his association with Robert Henri and his fellow Ashcan School painters, who rebelled against traditional academic art by painting gritty portrayals of daily life in New York in a painterly realist manner. Although Prendergast’s radical approach to color and form was entirely different from that of his realist cohorts, his fresh vision and desire for aesthetic independence was greatly admired by his peers, especially Henri. Prendergast subsequently exhibited with Henri and his fellow artists at the National Arts Club in New York in 1904, a notable event that anticipated the landmark exhibition of the Eight, held at the Macbeth Gallery in February 1908. (The Macbeth show featured work by the realist painters Henri, William Glackens, George Luks, Everett Shinn, and John Sloan, as well as the impressionist Ernest Lawson and Arthur B. Davies, a painter of visionary landscapes. Prendergast was the only painter in the group to have embraced a cutting-edge modernist approach.)