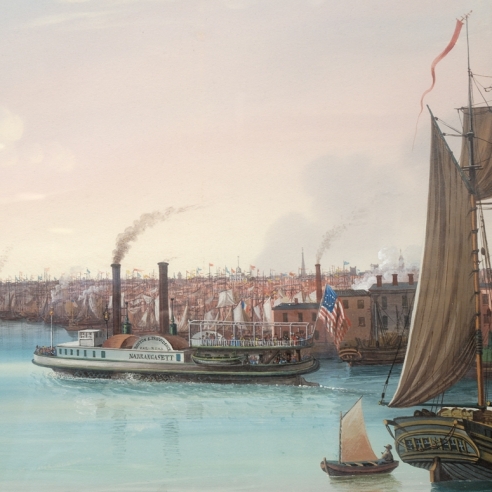 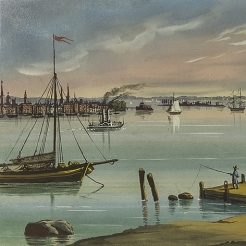 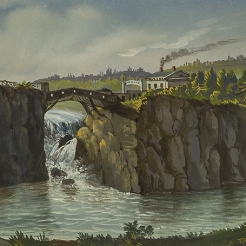 Nicolino Calyo’s career reflects a restless spirit of enterprise and adventure. Descended in the line of the Viscontes di Calyo of Calabria, the artist was the son of a Neapolitan army officer. Calyo received formal training in art at the Naples Academy. His career took shape amidst the backdrop of the political turbulence of early nineteenth century Italy, Spain, and France. He fled Naples after choosing the losing side of struggles of 1820–21, and, by 1829 was part of an Italian exile community in Malta. This was the keynote of a peripatetic life that saw the artist travel through Europe, to America, to Europe again, and back to America.

Paradoxically, Calyo’s stock-in-trade was close observation of people and places, meticulously rendered in the precise topographical tradition of his fellow countrymen, Antonio Canale (called Canaletto) and Francesco Guardi. In search of artistic opportunity and in pursuit of a living, Calyo left Malta, and, by 1834, was on the opposite side of the great Atlantic Ocean, in Baltimore, Maryland. He advertised his skills in the April 16, 1835, edition of the Baltimore American, offering “remarkable views executed from drawings taken on the spot by himself, . . . in which no pains or any resource of his art has been neglected, to render them accurate in every particular” (as quoted in 350 Years of Art & Architecture in Maryland [College Park, Maryland: The Art Gallery and The Gallery of the School of Architecture, University of Maryland, 1984], p. 35). Favoring gouache on paper as his medium, Calyo rendered faithful visual images of familiar locales executed with a degree of skill and polish that was second nature for European academically-trained artists. Indeed, it was the search for this graceful fluency that made American artists eager to travel to Europe and that led American patrons to seek out the works of ambitious newcomers.

On June 16, 1835, the Baltimore Republican reported that Calyo was on his way north to Philadelphia and New York to paint views of those cities. Calyo arrived in New York just in time to witness the great fire of December 1835, which destroyed much of the downtown business district. He sketched the fire as it burned, producing a series of gouache images that combined his sophisticated European painting style with the truth and urgency of on-the-spot observation. Two of his images were given broad currency when they were reproduced in aquatint by William James Bennett. The New-York Historical Society owns two large Calyo gouaches of the fire. From 1838 until 1855, Calyo listed himself in New York City directories, as a painter, as a portrait painter, as an art instructor, and in partnership with his sons, John (1818–1893) and later, the considerably younger Hannibal (1835–1883). Calyo also attracted notice for a series of scenes and characters from the streets of New York, called Cries of New York. These works, which were later published as prints, participate in a time-honored European genre tradition. Calyo’s New York home became a gathering place for European exiles, including Napoleon III. Between 1847 and 1852 Calyo exhibited scenes from the Mexican War and traveled from Boston to New Orleans with his forty-foot panorama of the Connecticut River. Later, he spent time in Spain as court painter to Queen Maria Christina, the result of his continuing European connections, but he was back in America by 1874, where he remained until his death.