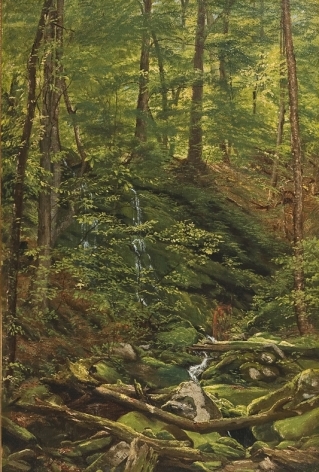 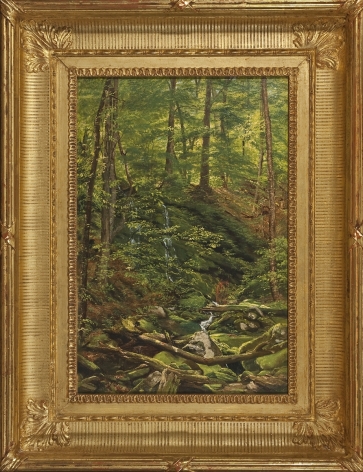 EX COLL.: the artist, and by descent in his family; to [Hirschl & Adler Galleries, New York, 1976–81]; to private collection, until the present

McEntee found special inspiration wooded areas, which throughout his career remained an enduring source of fascination. Lanes evokes the mood of a summer day in the woods, along the bottom of a shallow ravine. Painted in July 1855, it is among the earliest works in McEntee’s oeuvre. The woodland interior was a common motif among American landscape painters, including Asher Durand, who first popularized the genre, and Worthington Whittredge, who beginning in the 1860s made forest interiors a particular specialty. Like these two artists, McEntee here focuses on a quiet, isolated area beneath the boughs of tall trees. The artist’s exacting attention to the details of nature evince the influence of John Ruskin, whose “truth to Nature” aesthetic had such a profound influence on Americans at mid-century. Thin rivulets of water pour from the embankment at left, moistening the moss-covered rocks and earth that emphasize that this is a region rarely visited by direct sunlight. A few, thin tree branches fan out over the ravine, their small, green leaves painted in short flecks of paint.