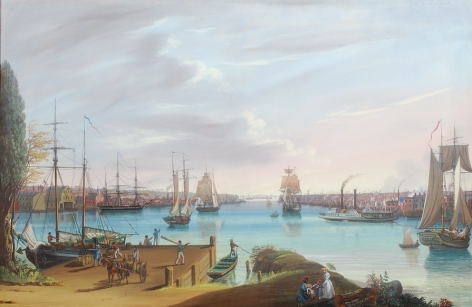 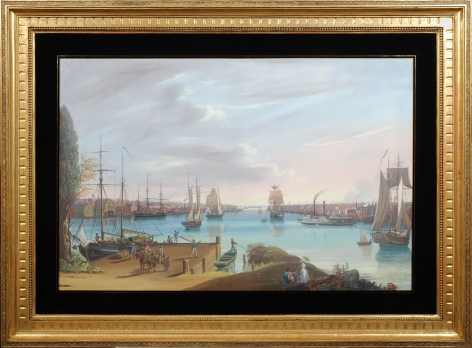 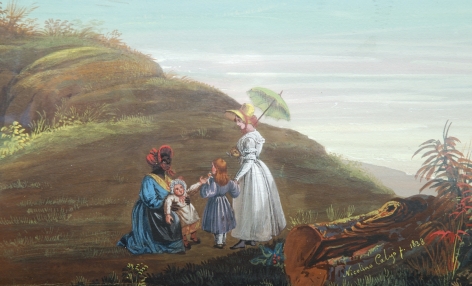 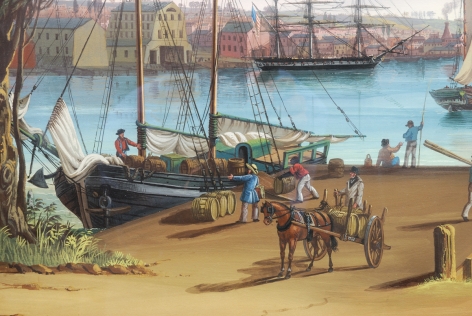 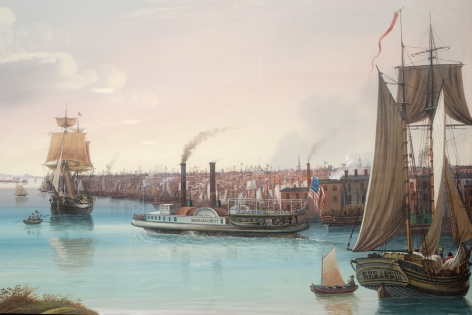 In this major gouache of 1838, Calyo assumes his preferred observation point: the far shore of a body of water offering the prospect of a cityscape that is the avowed subject of the composition. The foreground, then, serves as an opportunity for the artist to portray a genre or narrative scene. Here we are poised somewhere on the East River shoreline of the Village of Williamsburgh. (The “h” was dropped from the village’s name when it merged with Brooklyn in 1857.) The scene is a modest commercial dock, where a two-masted ship is tied up, its barrels revealing its commercial uses. An African-American stevedore loads a heavy barrel up the gangplank (a small population of African-Americans was among the earliest settlers of Williamsburgh), while the ship owner, with ledger book under his arm, converses with a mate on board. An elegantly dressed man walks purposefully across the dock, with oars balanced on his right shoulder, in the direction of a moored launch. On a point of land in the right foreground is a charming family group comprised of a young mother with a parasol, her daughter, a toddler, and an African-American nanny.
The view is toward the southwest, with Brooklyn down the shore to the left, and Manhattan across the East River, to the right. In the center in the far distance Governor’s Island is visible. Beyond that, on the horizon, the hills of Staten Island shimmer in a blue haze. Here Calyo explores some diverse aspects of the booming metropolis. The docks that crowd the shore of the East River in lower Manhattan are solidly lined with the sails of trading vessels that made New York City the commercial capital of North America in the nineteenth century. Governor’s Island, originally the home of the British colonial governor, became a military installation after the Revolutionary War and has remained so until 1996, when the coast guard closed its base there. (The island was sold to New York City by the Federal Government for one dollar in 2002.) In the middle distance in Calyo’s scene, at Wallabout Bay, is another testimony to military presence, and also to the national importance of the port of New York. The New York Naval Shipyard (popularly known as the Brooklyn Navy Yard) was established in 1800 by order of the Secretary of the Navy. Its commandant’s house, designed by the eminent architect Charles Bullfinch in 1806, is on the National Register of Historic Places. During the early part of the 19th century the base was the center of activity in naval activities against the Barbary pirates, and, during the War of 1812, more than 100 ships were outfitted for duty there. A naval frigate, perhaps having just been fitted out, marks the site in Calyo’s view.

The New York shoreline, seen from a variety of spots in New Jersey and Brooklyn, was a favorite topic for Calyo. He painted large and small versions of the present subject, each one different in precise vantage and foreground detail. Among these, in addition to the present New York and Brooklyn from Williamsburgh, are View of New York from Williamsburgh, Long Island, New York, and New York from Hoboken (both in the collection of the New-York Historical Society, illus. in Richard J. Koke, American Landscape and Genre Paintings in The New-York Historical Society [1982], vol. 1 nos. 283–84, pp. 132–33, respectively); a similarly sized View of New York from Williamsburgh (private collection, New York), which is apparently a later view of the present scene, in that the sidewheel steamboat “Narragansett” from the Boston & Providence Rail Road has made its way further down the East River when compared to its position in the present view; a small sketch called New York and Brooklyn from Williamsburg and New York from Hoboken (both formerly in the collection of the Hirschl & Adler Galleries), as well as New York, 1837 (Museum of the City of New York, illus. in John Kouwenhoven, The Columbia Historical Portrait of New York [1953], p. 158). 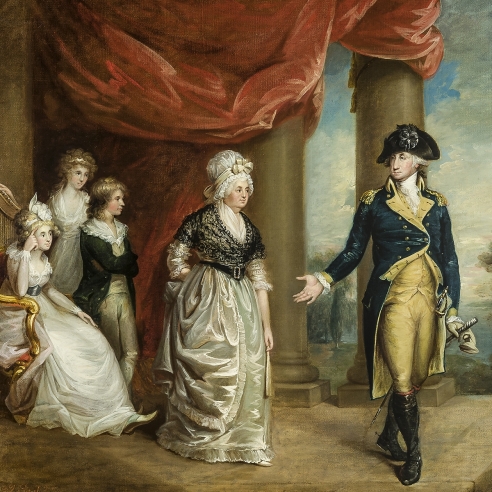 Historical
Back To Top