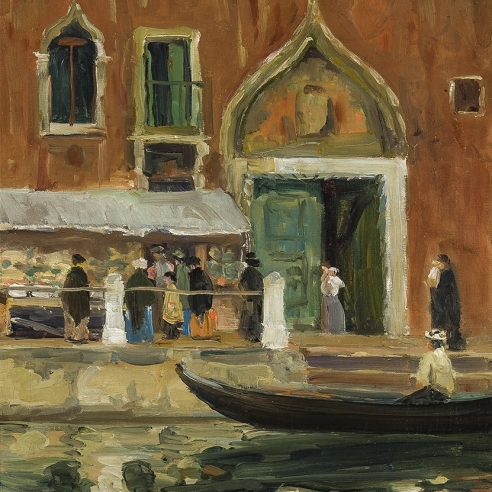 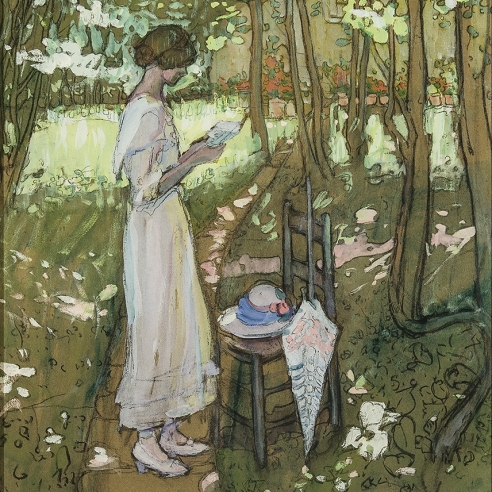 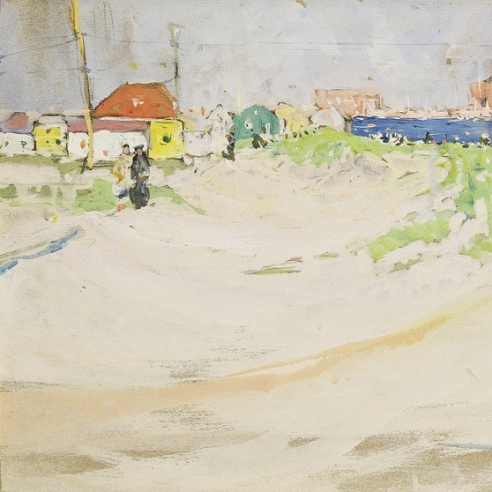 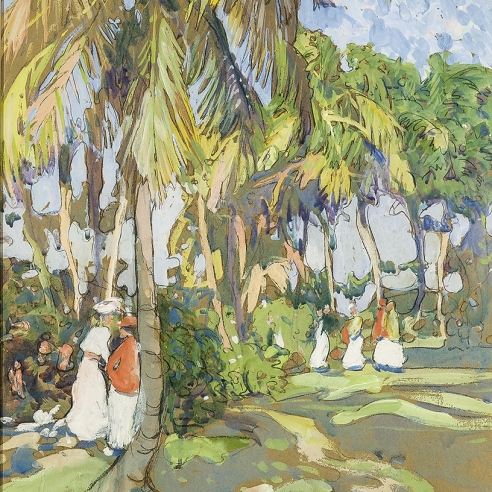 The Jane Peterson story makes good copy. Poor girl becomes successful, globetrotting artist. Meets and marries wealthy older lawyer and, at age fifty, trades the canals of Venice and the bazaars of Istanbul for the life of a society matron, traveling no farther than her attic studio atop an opulent Fifth Avenue townhouse where she devotes all her time to painting floral still lifes. The truth, as always, is considerably more nuanced, and Jane Peterson’s dedication to her life in art—early and late—never wavered.

Jennie Christine Peterson (later, she chose to be called Jane) was born in Elgin, Illinois, in 1876, the second daughter, and ultimately the second of four children, of Julius John Peterson and Katherine Olson Peterson. Julius Peterson, a native of Norway, was a jeweler employed by the Elgin Watch Company. Katherine Peterson, the daughter of Swedish immigrants, was a homemaker. Jennie Peterson showed an early knack for art, nurtured in the Elgin public schools. Though her talent was unmistakable, the path forward was by no means clear. Money was tight and her father was justly dubious about the career prospects for a young woman intent on studying art. Nonetheless, Jennie traveled the forty miles to the Art Institute of Chicago to sit for an art aptitude test administered by Pratt Institute of Brooklyn. The results confirmed her manifest talent and Peterson determined to go to New York City to study at Pratt. With $300 borrowed from her mother to cover railroad fare, tuition, and initial living expenses, she left Illinois, armed with her mother’s parting advice: “Never go out with men who smoke cigarettes. Never let a man buy, or serve you wines or harsh spirits.” (The major source on Peterson remains J. Jonathan Joseph, Jane Peterson: An American Artist [Boston, Massachusetts: privately printed, 1981]. The anecdote above is quoted from Meyer Berger, “About New York: The Girl Who Came Here in Second-Hand Dresses Now Walks with Princes,” New York Times, December 12, 1956, p. 49 section L.) From the very beginning, Peterson was determined, intrepid, and energetic. She parsed her scarce funds for a modest room, simple food and art supplies, and supplemented them by offering private art instruction. Her mother’s advice proved more than quaint. The story of Jane Peterson’s career in art is the story of a woman with unshakable purpose, independence of mind, and unerring judgment in her choice of friends, companions, and mentors.

Peterson arrived at Pratt in time to register for the fall 1895 term. Pratt Institute, in 1895, was a relatively new school. Founded in Brooklyn, in 1887, by Standard Oil millionaire Charles Pratt (partner to John D. Rockefeller) to “educate artists and creative professionals to be responsible contributors to society,” Pratt’s mission was wholly consistent with Jennie Peterson’s ambition: to acquire the skills she would need to earn a living as an artist. Peterson arrived at Pratt at the same time as a new instructor in the Fine Arts program, Arthur Wesley Dow (1857–1922). Peterson was Dow’s student during the years that he was codifying his teaching philosophy and methods, which he published in 1899 as Composition. Dow was a tremendously influential teacher. While his pedagogical methods, as explicated in Composition, were adopted (and adapted) all over the country, it was not so much his method, but his spirit, that freed his students to express their own individuality. At Pratt, Peterson was a classmate of Agnes Pelton and Max Weber. The core of Dow’s philosophy was explained succinctly by a subsequent student, Georgia O’Keeffe, whom Dow taught at Columbia University Teacher’s College: “The man had one dominating idea: to fill a space in a beautiful way... ” (Frederick C. Moffat, Arthur Wesley Dow [1977], p. 129, as quoted in Katherine Kuh, The Artist’s Voice [1962], p. 190). This was clearly the message that Peterson gleaned from her teacher and it fell on receptive ears. In 1922, Peterson told The Garden Magazine, “My great and absorbing passion is the love of beauty.... Beautiful things give me pleasure.... As fine art is the application of the principle of aesthetics or beauty, painting has especially appealed to me as an outlet...” (as quoted in Joseph, p. 106).

Peterson graduated from Pratt in 1901 with a firm grounding in Dow’s analytical approach to the principles of composition. She immediately found work as a drawing supervisor in the Brooklyn public schools, continuing her art education at the Art Students League, where she worked with Frank DuMond, Birge Harrison, and Henry Snell. While at Pratt, Peterson had attracted the attention of a wealthy patron, Alexander M. Hudnut (1861–1940), who remained an important presence in Peterson’s life. Hudnut, part of a large family whose American roots pre-dated the Revolutionary War and sent its sons to Princeton (Class of 1881), was a stock broker, financier, watercolor artist, art collector, writer, and opera buff who would later prove the link between Peterson and her future husband.

In 1904, Peterson took a job in Elmira, New York, as an art supervisor in the public schools. Finding Elmira too isolated, in 1906 she joined her former teacher, Henry Snell, as an instructor at the Maryland Institute Schools of Art and Design (now Maryland Institute College of Art) in Baltimore. In the summer of 1907, Peterson went to Europe with Snell and his wife Florence, also an artist, as part of an organized art trip, visiting the Cornish coast of England, Holland, northern Italy, and Venice. Europe captivated Peterson. She understood the opportunities it offered, not only to see the great art of the past and visit scenic locales, but to experience the art ferment of the early twentieth century and seek instruction from painters who could further her understanding of technique and especially, the use of color. She resigned her Baltimore teaching position, and funded by Hudnut, remained in Europe after the Snells’ study-tour was over.

At the Venice Biennale, Peterson admired the strong design qualities of the work of art-nouveau English artist Frank Brangwyn and returned to England to study with him at his London School of Art. On Brangwyn’s advice, Peterson went to Paris in the spring of 1908 to study with one of the most celebrated society portraitists of the time, Jacques-Émile Blanche. In the heady days in Paris in 1908, Peterson lived around the corner from Gertrude Stein’s famous cultural salon and was a sometime visitor. The American Midwesterner must have cut a strange figure in this crowd of haute bohemians, but she observed all that went on around her and was able to appreciate the liberating sense of freedom, even if she had no inclination to be part of any vanguard movement. This year also marked a watershed in Peterson’s career. She received her first solo exhibition at the Société des Artistes Français in Paris and, later that year, at the St. Botolph Club, Boston. Buoyed by these developments, Peterson jubilantly changed her given name to Jane. She returned to Venice and spent the remaining months of 1908 working in the city that quickly became her favorite haunt.

In Venice, Peterson met American artist Francis Hopkinson Smith, who saw an affinity between her style and that of the internationally acclaimed Spanish Impressionist, Joaquìn Sorolla y Bastida. Smith brokered a meeting between the two artists and Sorolla agreed to take Peterson on as a student. In the summer of 1909, Peterson arrived in Madrid for six months of exclusive study with the Spanish master. She lived with Sorolla’s family and the two artists worked side by side. Of all her teachers and mentors, Sorolla, renowned for his dazzling color, had the most profound influence on her. Under his guidance, Peterson’s work took on a new brilliance of color and spontaneity of execution. Sorolla also encouraged her to be prolific, arguing that painting ten or more oil sketches a day would produce better results than completing one ambitious canvas. In 1910, Peterson left Madrid infused with new artistic energy and direction. She journeyed to Egypt and Algiers, meeting in the course of her travel a fellow American woman, Mrs. Theodore A. Shaw. Shaw was a companionable amateur artist also traveling and sketching, but as importantly, she was a Chicago socialite with close family ties to the Board of the Art Institute of Chicago. The two became fast friends. Peterson visited Shaw in Chicago where, in December, she triumphantly opened a solo exhibition of eighty-seven paintings at the Art Institute.

Firmly launched on her career, the years that followed were busy, successful, and full of travel. Peterson was in Paris in 1912; in 1915, she visited the American Southwest; in 1916, she accompanied Louis Comfort Tiffany, sharing his private railway car on a transcontinental painting expedition to the Canadian Northwest and Alaska. Also in 1916, Peterson visited the art colonies of New England—Gloucester, Newport, Provincetown, and Ogunquit. From 1912 to 1919 she returned to the Art Students League as an instructor in watercolor. But Europe remained her lodestone, and Peterson returned there nearly every summer for the next decade, save for the years of the First World War.

Peterson spent the summer of 1924 in Constantinople, Turkey. The exotic capital of the former Ottoman Empire impressed the artist, and a group of distinctive works resulted from this trip. Peterson returned home in January 1925 for a critically acclaimed exhibition of her Turkish paintings. Through the years, Peterson had attended the Metropolitan Opera with Alexander Hudnut, striking up a friendship with the couple in the adjacent seats, Mr. and Mrs. M. Bernard Phillip. Phillip was a wealthy corporate lawyer who had drafted the incorporation papers for his friend, George Eastman of Eastman Kodak, and had been paid in stock for his effort. Mrs. Phillip died in 1922, and in 1925, Bernard Phillip, twenty-five years her senior, proposed marriage to the fifty-year-old artist. The condition of the marriage, to which Peterson agreed, was that she share her husband’s long-established domestic routine. They lived at first on East 57th Street in a house that Peterson found too dark. Phillips then purchased a townhouse on Fifth Avenue, opposite The Metropolitan Museum of Art, and built onto it a special rooftop painting studio for his wife.

The newlyweds quickly settled into a routine of New York City society punctuated by summers in Ipswich, Massachusetts, at Philipp’s country estate. Peterson’s oeuvre changed dramatically as foreign travel vanished from her life: In place of the buildings of Venice or the gardens of Paris, flower arrangements occupied her canvases. These highly colorful and expressive “flower portraits,” as she called them, dominated her output in the last forty years of her life.